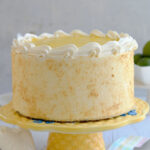 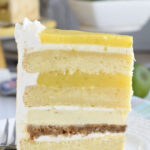 Key Lime Layer Cake has all the best things about Key Lime pie, in a cake. Buttery vanilla cake is layered with key lime curd, key lime cheesecake and a special graham cracker crunch. A hint of rum takes the flavor up a notch.

Right off the bat I’ll admit that this is not a “super quick and easy” recipe. None of the components are difficult to make, but it is a bit of a project that is best accomplished over a couple of days.

I wanted to create a special layer cake that had the wonderful flavors of Key Lime Pie. But I did go off script a bit because I couldn’t resist adding a cheesecake layer. Even better, there’s a special graham cracker crunch that is the star of this cake.

Yes, yes, I know I don’t actually use “key limes” in the recipe. But since everyone refers to any lime dessert as “key lime”, I’ve taken the liberty to name this cake after the famous pie. If you have key limes you can certainly use them.

Scroll through the step by step photos to see how to make This Cake:

How to work ahead to make this cake:

Since you love lime, here are some other recipes you should try:

Layer cakes don’t have to be just cake and frosting. Here are a few more innovative layer cakes:

The cake must be stored in the refrigerator because of the cheesecake and curd fillings. Take the cake out 1-4 hours (depending on the temperature of the room) before serving to allow it to soften. Leftovers can be refrigerated and the cake freezes very well.