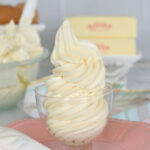 Swiss Meringue Buttercream is light, fluffy and not too sweet. This frosting is a dream to work with. It takes on almost any flavor and is strong enough to pipe roses and other decorations.

What is Swiss Meringue Buttercream (SMBC) anyway? Is this the national frosting of Switzerland?

Honestly, I have no idea if they actually make SMBC in Switzerland. A so-called “swiss” meringue refers to the process for making the meringue that is the base of this buttercream.

To make a swiss meringue you stir egg whites and sugar over simmering water until the temperature reaches between 120°-160°F.

Warming the egg whites this way will melt the sugar and partially coagulate the egg proteins. This makes a very stable meringue that is super easy to work with and is a great base for light and fluffy frosting.

Scroll through the step by step photos to see exactly how to make Swiss Meringue Buttercream:

How to fix Swiss Meringue Buttercream:

What is the best temperature for making swiss meringue?

You should heat the egg white & sugar mixture between 120°-160°F. If you are not worried about salmonella in your egg whites you can use the lower end of the temperature range. Bringing the whites up to 160°F will ensure that any bacteria is killed-off.

Can I tint Swiss Meringue Buttercream?

How can I flavor Swiss Meringue Buttercream?

Can I make Swiss Meringue Buttercream in advance?

Yes, Swiss meringue buttercream can be stored at room temperature for 1 day, refrigerated for several days or frozen for up to 3 months. Bring the buttercream back to room a temperature and re-whip before using.

No, after 6-8 hours the buttercream should be refrigerated or frozen.

How much Swiss Meringue Buttercream do I need for an 8″ cake?

Can I fix Swiss Meringue Buttercream that is curdled or cracking?

If you want a buttercream that is just as light and airy as a meringue buttercream, but with a slightly richer flavor and color, try making classic French Buttercream. It’s made with egg yolks instead of egg whites.

If the buttercream becomes "spongy" while standing re-whisk to correct the texture. The buttercream can be refrigerated 3-4 days or frozen for several weeks. Return to room temperature and re-whisk before using.

How would I make lemon ? Just juice or would you recxomend limencello as per text above?

Lemon juice only adds acidity. The lemon oil in the zest has the lemon flavor. Use fresh lemon zest/juice or lemon extract or limoncello or a combination of the three to flavor the buttercream. When I have lemon curd I also use that to flavor buttercream.

Hello, I'd like to make this with a raspberry flavour. Can I just add jam at the end or should it be unsweetened puree? Also how much can I add to this recipe without compromising it.

Thanks so much, I'm so excited to try this!

You can add either jam or puree, but I think unsweetened puree gives the best berry flavor. The buttercream can actually take a surprising amount of liquid. I would start with 1/4 of a cup and keep adding a tablespoon at a time until you get the flavor you like. A squirt of lemon juice with amp up the raspberry flavor too.