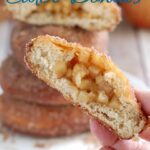 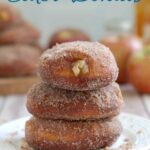 These Apple Filled Donuts are made with yeast for a light and airy crumb. Fresh apple filling & a secret ingredient gives these luscious donuts an amazing apple pie flavor.

This recipe is an adaptation of my favorite Apple Cider Donuts. It’s basically the same donut stuffed with delicious apple filling.

In fact, I originally set out just to make these Apple Filled Donuts. I wanted to create a donut that was a cross between apple pie and cider donuts, and I did.

But I love the cider dough so much I created another whole post for Apple Cider Donuts, sans filling, for the cider donut purists of the world.

I love both versions so you can’t go wrong either way.

How to make the best Apple Filled Cider Donuts:

After all the trials and tribulations I went through to get my cider donut dough to behave I had a good base for an Apple Filled Cider Donut.

Of course I wanted a good filling made from fresh apples. That was easy enough since I’ve made about a million apple pies in my lifetime. The only tweak for the filling was to cut the apples cubes small enough so the filling could be piped into the donuts.

The filling was easy, so the main puzzle for this recipe was how to get the filling into the donuts with the right balance of dough to filling.

The first time I made the donuts I cut the rounds 1/2″ thick. They were almost an inch thick after the final rise, and then they puffed up more in the fryer.

Those donuts were huge and overly browned because they spent too much time in the hot oil. By the time the filling was added they were big, dense, belly-bombs. Nope.

Next I tried layering the filling into the donuts before frying. But this process was a bit fussy, plus I was worried about the dough frying properly with the filling in the middle. There was also the possibility that a donut could spring a leak in the hot oil. Ack, that would be a lot of splattering hot oil.

Round 3 – I rolled the donuts after the first rise, without kneading the dough. I cut the the rounds nice and thin, just a 1/4″ thick.

By the time they rose to about a 1/2″ they were ready for the fryer. They puffed up beautifully in the heat of the oil. The light and open crumb made it very easy to form the “pocket” for the filling.

I’m happy with the donut to filling ratio for this recipe. There’s just enough filling in each donut to get great apple-pie flavor, and enough dough to get a good, chewy chunk of donut in each bite. Mmmm.

Scroll through the step by step photos to see how to make Apple Filled Donuts:

If you maintain a sourdough starter you should try making my super-popular Sourdough Donuts.

Now that you know about the flavoring power of reduced apple cider, you should try these amazing Apple Cider Caramels!

Hi there, I'm super excited to try making these for Hanukkah! I just wanted see about skipping on the filling - I've got picky kid eaters and maybe just doing a jam on the side for dipping? Any ideas for a flavor that would go well? And would it change how I make / fry the dough? Thanks!

Hi Sara, this recipe for cider donuts is the same dough made without a filling.