Glazed Maple Apple Pie is the perfect fall dessert. Get a double dose of maple with your apples; in the filling and in the glaze. The pretty maple leaf border is a special finishing touch. 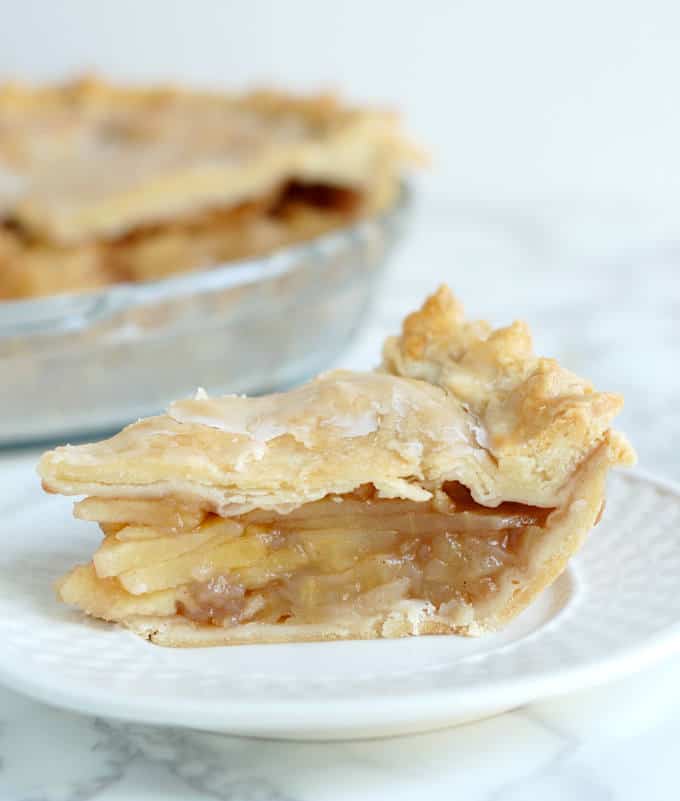 I get lots of apples of many varieties from our farm share, and over the last few weeks I’d accumulated a nice stash in the fridge. Time to post a great apple pie recipe on the blog!

I made this Glazed Maple Apple Pie using the random assortment of apples I had in the refrigerator. You can use your favorite pie apple. 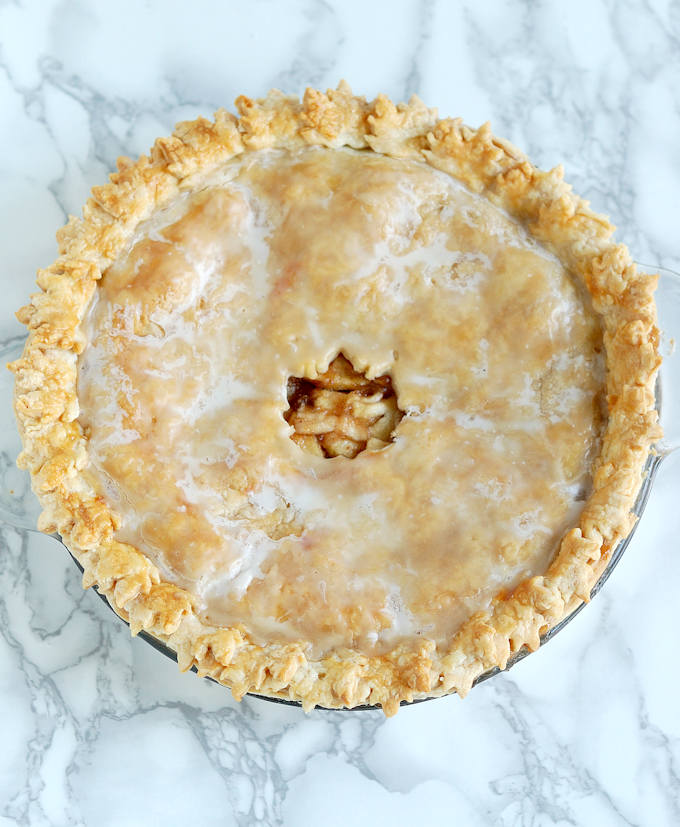 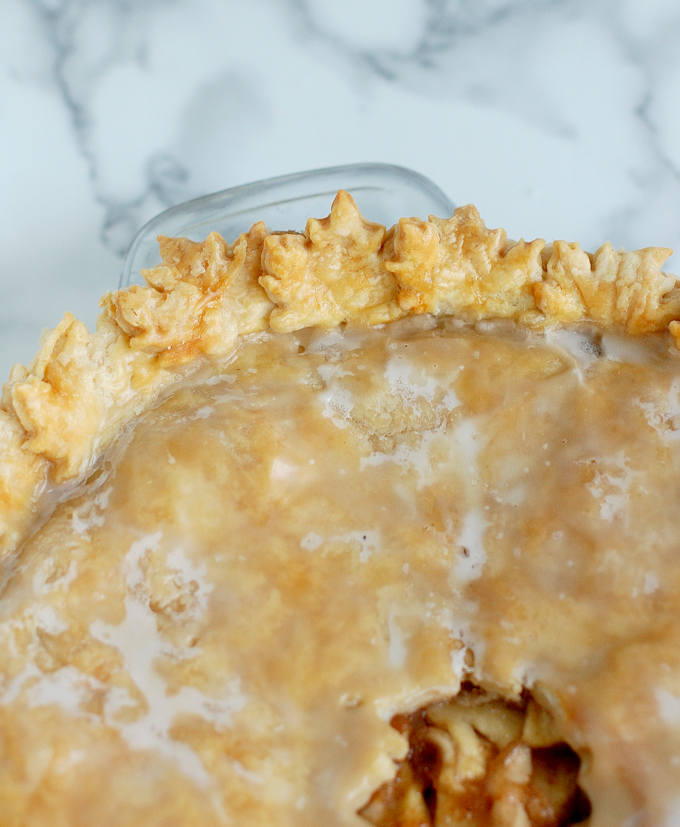 The first test run of this recipe was going really well. I employed my favorite fruit-pie technique of macerating the fruit in the sugar and pre-cooking the juices before filling the pie.

Macerating the fruit is an important step for three reasons; 1. to reduce boil overs, 2. to allow pre-cooking of the starch and, 3. to help the fruit maintain its shape while baking.

Because the sugar draws excess water from the fruit the amount of boil over during baking is reduced. Once the juice is drawn out of the fruit you can pre-cook it with the corn starch to ensure that the starch will be fully activated (under cooking the starch could result in a runny pie filling).

When fruits and vegetables are heated (e.g., baked in pie) the cell walls weaken and the water contained in the plant leaks out. The fruit or vegetable looses its structure and becomes mushy. When uncooked fruit is tossed with sugar, the sugar is drawn into the fruit and reinforces the cell walls, allowing the fruit to maintain it’s shape while baking. No mushy pie filling! It’s like magic, except that it’s science.

Things were going great and I thought I might get the recipe right on the very first try, with a good video to boot. The pie came out of the oven smelling divine and looking beautiful, and then I ruined it with the glaze. 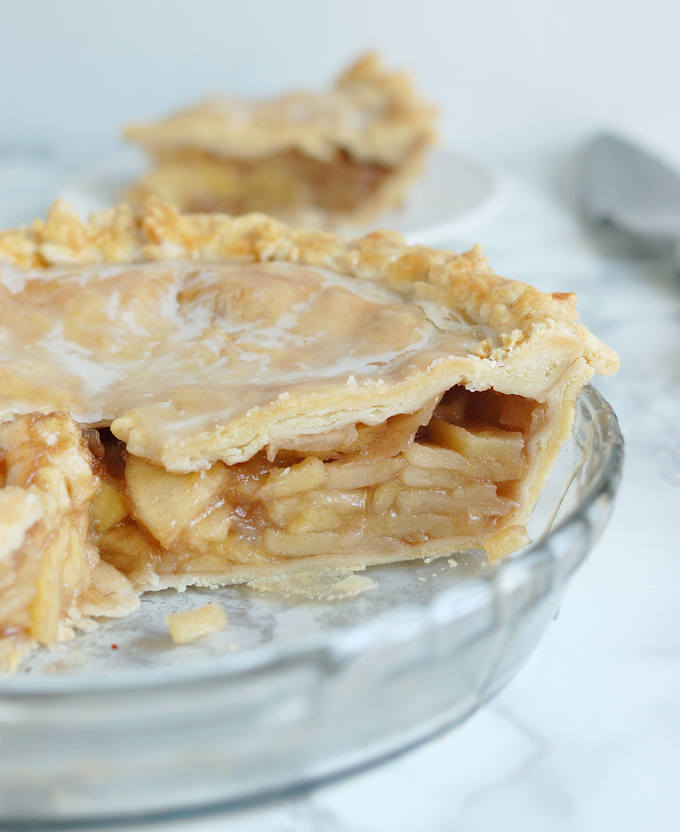 Macerating the apples helps them keep their shape while baking. No mushy filling. 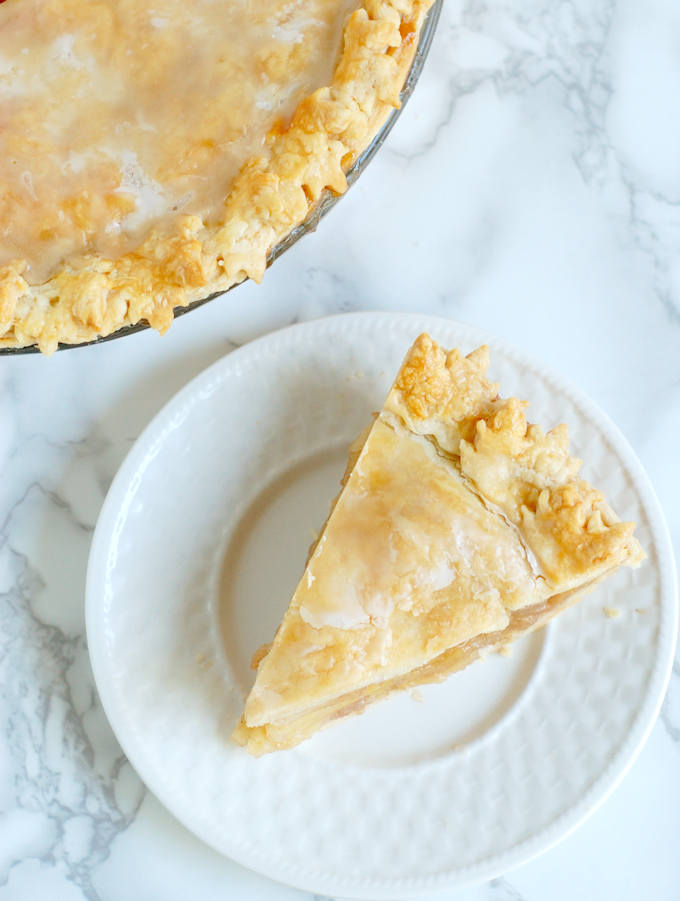 I used the same maple glaze that I put on my favorite Oatmeal Cookies. Problem was, that glaze was much too thick and it totally covered up the pretty maple leaf border that I’d created and left a thick, clunky layer on top of the pie. It was tasty, but not blog worthy.

So, back to the drawing board. While I was at it, I wanted to tweak the filling just a bit. I always put a little lemon zest and lemon juice in my apple pie filling. The lemon helps accentuate the apple flavor. But I noticed that the lemon flavor was a little too strong in the first pie. So I planned to reduce the amount of juice and zest in the filling for the 2nd round of testing.

While I was making the 2nd pie, I tasted the filling after the apples macerated in the sugar and syrup, but before the lemon was added. I really liked the flavor exactly as it was so I decided to nix the lemon all-together. Without the lemon the maple flavor was more prominent.

Depending on the type of apple you’re using, you may want to add just a smidge of lemon juice to spark the flavor. Taste the apples and judge for yourself. Oh, and don’t skip that little pinch of salt in the filling, it does wake up the flavors without leaving a salty taste. 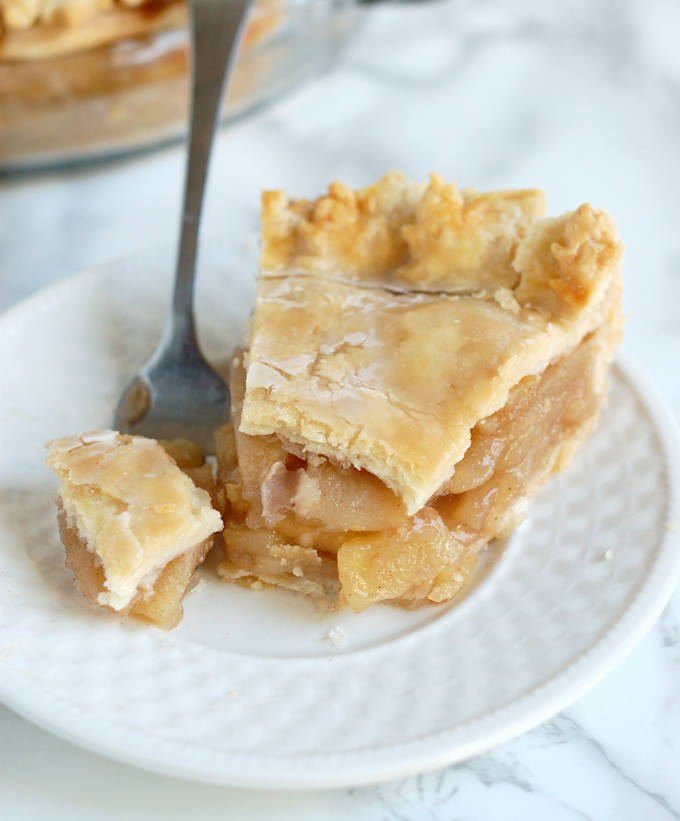 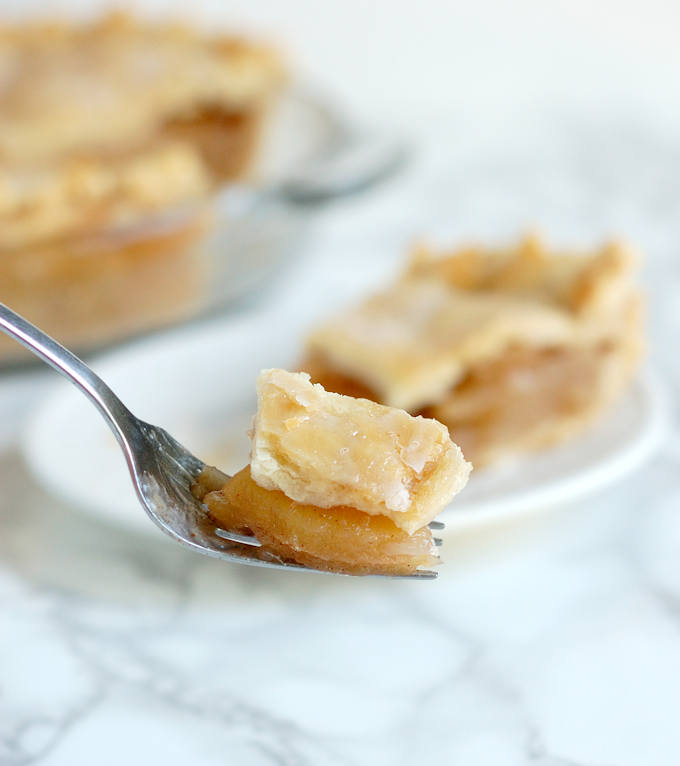 Don’t you think this pie would look beautiful on your Thanksgiving table?

I only recommend real maple syrup for the glaze. Grade B syrup has the strongest maple flavor. 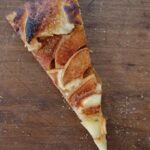 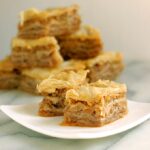 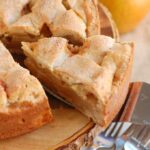 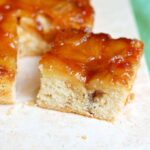 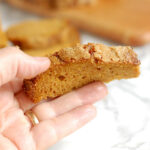 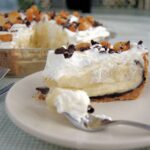 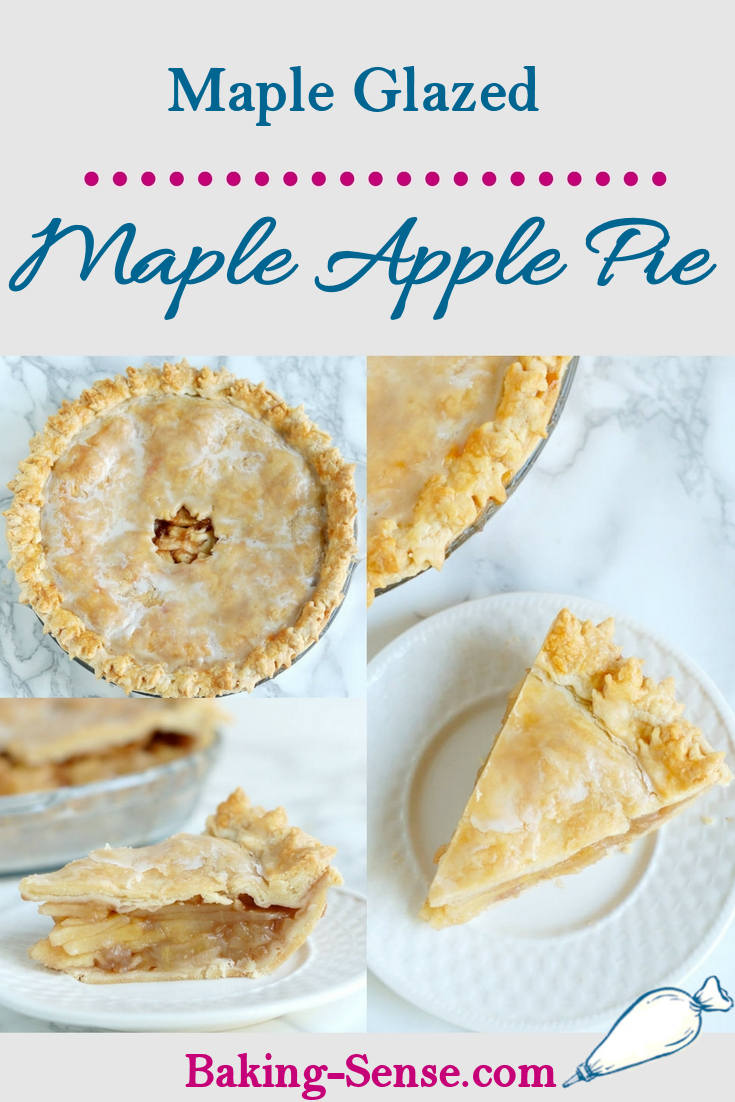 Hello Eileen, most pie recipes call for a very hot oven, 400 -425 degrees for fifteen minutes and then turn down to 350 for 45 minutes. In fact many bakers I know bake the pie at 400 for 45 minutes. I am wondering why you advise 350 for the full hour or 325 for convection ( I have a convection oven) I am eager to try this recipe!

Sorry, I never saw this comment yesterday. Glad the pie turned out well.

I am replying to my own post....I made the pie today and two very experienced pie bakers degreed it one of the best pies they ever ate! I baked it using your temperatures and time set on regular bake ( not convection) the pie was a marvel. Three eighty year olds and two mid sixties made it disappear leaving just a tiny piece for my husband. Your pie crust recipe is amazing as well and you are correct that patience is a key ingredient in making delicious flaky pie crust...We all go too fast these days! I usually use lard and butter .as that’s a common mix in Canada but I like your method of lard in first and then the butter. I chilled it over night. My SIL is a great pie maker and alway makes pie crust when she has a few minutes to spare and stashes it in the freezer for future baking. ... don't worry about my husband I have enough pastry for a few butter tarts tomorrow!

I make mini or individual desserts for parties. Would this recipe work for individual pies? If so, how much should I reduce the baking time.

Yes, I've done this recipe in mini individual serving pie pans. The problem with small pies is that they're not in the oven long enough for the apples to bake through. When I make mini pies I precook the filling. You can follow the recipe as instructed, but instead of draining the apples and mixing 1/4 cup of the juice with the starch. Just put the apples and all of the juice into a pan. Cook the apples until they are crisp tender. Then add the corn starch and cooks until the juices thicken. Allow the filling to cool then assemble the pies. Since the filling is already cooked you just need to bake the individuals pies long enough to bake the crust.

Hi Eileen! I have lots of questions. I love your recipes and especially this recipe. It taste so sumptuous and the flavor is just perfect. I actually compared this recipe to another recipe made by a well known bakery in the D.C. area and your recipe was the winner in my family hands down! In fact, with the other recipe ( https://luxegetaways.com/danielles-desserts/), the filling boiled over and made a mess. Not so sure why, but I am so happy I found a perfect apple pie recipe here.

Now, for the crust...I never tried making a homemade crust until yesterday and I love your recipe. But I am a novice. I was pleased with the single blind crust for my pumpkin pie, it looked and tasted delicious. However, I noticed the next morning there was was a little water formation on top of the pie. I had allowed the pie to cool after baking and then wrapped in aluminum foil that evening and placed in refrigerator. What would cause the water to form on top? I also had difficulty when making the double crust. The filling for the pie was fine, however,the top crust edges began falling down once I placed it in the oven. So, I tried it again, and still the edges of the top crust drooped down as if melting. The crust also taste just a little gummy or doughy. I used buttermilk instead of water. So, my questions are: what caused the water formation on the pumpkin pie? What caused the top crust edges to droop and fall? What makes the crust taste doughy? Lastly,what is the positive differences in your apple pie recipe and the other listed above? I am trying to understand the science of it all.

Thanks for your help!

Hi Kay - I'll try to answer all your questions. I believe the water formation on the top of the pumpkin pie was simply condensation. Even if it was cooled to room temperature before going in the refrigerator, it will continue to cool and since it was covered it would form some condensation. In the future I would let the pie completely chill before covering. Even then you might get some condensation. I don't think it's a big deal to leave it uncovered if the condensation bothers you. Which crust recipe did you use, mine? Replacing the water with buttermilk would make a big difference. Buttermilk is acidic so it will tenderize the crust. There are also milk solids, a little fat and other things in buttermilk that are not in water. The crust would droop and fall because it was so tender with the addition of buttermilk and I think that would also make it taste doughy. The section of the post titled "Pie Science" explains why I macerate the fruit for the filling and how this prevents boil overs and mushy fruit. Hope this answers all your questions. I'm planning a whole series of posts about ingredients and mixing technique for pie dough (similar to my Cake Batter series). It will take some time to put together, but keep an eye out for it.

Hi Eileen! I truly enjoy this website. I want to make an apple pie without the maple glaze. Do you have a recipe for that or do I simply follow this recipe but leave out the ingredients for the maple glaze when preparing the pie. Thank you so much!

Yes, you can make this pie and just skip the step where you add the maple glaze. If you aren't going to glaze the pie you can sprinkle the top crust with a little granulated sugar after you brush it with the egg white before you put it in the oven. I like the bit of crunch the sugar adds to the top crust.