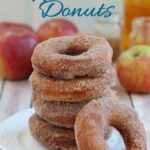 These Apple cider donuts are made with yeast for a light crumb and deep-fried for crisp texture. I use a special trick for getting the most apple-y flavor in these cider donuts.

If you think all Apple Cider Donuts are the same, this recipe just might change your mind.

Most Cider Donut recipes make “cake style” donuts. That is, the donuts use baking powder and/or baking soda for leavening. So the texture is more cakey/muffiny than bready.

Personally, I always prefer a yeasted donut. I like the chewy, bready texture of a yeast-risen donut better than the cakey texture of a baking powder donut.

If I’m going to the trouble of making my own donuts, I will take a little extra time to make them with yeast. But don’t worry, I’ve developed this recipe so that it can be made overnight for maximum ease.

Also, if I’m gonna have a donut I’m going all the way and having a fried donut. Ya know, “in for a penny, in for a pound”. Well, maybe this isn’t the best time to talk about pounds…

I’ll tell you guys – this recipe almost kicked my butt. It took 5 tries to finally sort this one out.

How to get the most apple flavor in Apple Cider Donuts:

From the git-go I knew I wanted an apple cider donut that actually tastes like….wait for it….apple cider! I used a simple trick to maximize the flavor of the apple cider; reduction.

By boiling down the cider to 1/4 of its original volume we loose a lot of the water and none of the flavor. So we’re able to add a lot more cider flavor to the donut dough.

But that reduced cider is what caused me so much trouble.

How sugar can affect yeast activity in your bread dough:

The first batch of dough that I made was like a dead weight. I tried warming it up over a bowl of hot water, setting the bowl into a warmed oven and finally took the drastic measure of microwaving the dough for 20 seconds to see if there was any yeast activity at all.

Nothing. It was like a lump of play dough.

I thought my yeast was bad. I’d just taken some yeast out of the freezer to make the dough, but it had been in there for quite a while. So I bought brand new yeast and made the dough again.

Same lump of dead weight as the first time.

Time to do a little research. My first thought was that maybe the acidity of the reduced cider was too much for the yeast.

At this point I was using 1 1/2 cups of cider (reduced down from 6 cups) in the recipe. I added the yeast directly to the cider to start the recipe.

I found some great information on the Red Star Yeast website. It seems that excess sugar in the dough was halting the yeast activity. In short, yeast likes sugar, but (just like us) moderation is important.

A quick google search told me that 6 cups of cider has about 6 oz of sugar. That’s 3/4 cup of sugar, which made this a high-sugar dough.

Sugar is hygroscopic (absorbs water). Yeast needs water to activate. A high proportion of sugar in the dough will take up too much of the water, leaving the yeast too thirsty to do it’s job.

So I lowered the amount of reduced cider to 1 cup and added a 1/2 cup of warm water to the dough. I mixed the yeast with the water and some flour to create a sponge. The sponge gives the yeast and the gluten a head start before the other ingredients are added.

That did the trick! This recipe makes a dough is beautiful, light and elastic.

It took a couple more tries to perfect the rolling, cutting and frying steps before the recipe was blog worthy!

Scroll through the step by step photos to see how to make the best Yeasted Apple Cider Donuts:

Want to make a good thing even better? Try making these Apple Filled Cider Donuts for a real treat. If you maintain a sourdough starter you’ll love these Sourdough Donuts.

Now that you know about the flavoring power of reduced apple cider, you should try these amazing Apple Cider Caramels!

Ive made this recipe before how its written and they tasted so good! I am obsessed with the recipe! Especially because it is still a yeast donut recipe (idk why, they taste better with yeast). I wanted to remake them for a party, but have some guests that are allergic to eggs. Other apple cider donut recipes I've tried always come out too dense. Is there a substitute that still might work or maybe removing the egg?

I've had good results using Bob's Red Mill egg replacer in a lot of different recipes. I think it could work here.

Can you bake them instead of frying them and will they still turn out light and fluffy?

You can, but the texture will be different.

I got a little confused reading the recipe. You call for using 3 3/4 cups of flour. When it says to add remaining flour in step 4. Would that be another 1 1/2 cups? It didn't give a measurement and wanted to clarify.

Can you air fry these? I might try next week. Thank you.

I don't have an air fryer so I haven't tried it. But the same question was asked about my Sourdough Donuts and a reader said they did make them in an air fryer. They left this tip "If you make them in the air fryer, spray with oil and cook for 3-6min per side. After they were cooked I sprayed them again with oil to make the cinnamon and sugar stick."

What kind of yeast did you use? Instant rapid rise or active?

You can use either. I tend to keep dry active yeast in the house.