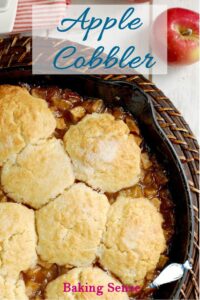 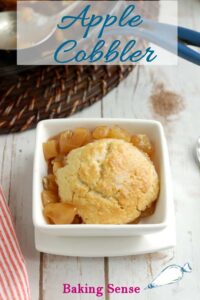 This Skillet Apple Cobbler recipe is made with fresh apples baked under a biscuit topping with a hint of vanilla. The apples are mixed and baked in a cast iron skillet. It’s the perfect dessert for your next autumn gathering.

This skillet apple cobbler, with the juices still bubbling from the oven, is exactly the warm and cozy dessert you want to serve as the weather turns cooler.

This recipe makes a big cobbler than can feed about 12 people. For a smaller group you can halve the recipe and bake it in an 8″ skillet.

Scroll through the step by step photos to see how to make this Apple Cobbler Recipe:

For a smaller group, the recipe can be halved and baked in an 8" skillet.

Welcome!! Baking is an art and a science, but it’s not rocket science. Anyone can bake if they have a good recipe and the helping hand of a seasoned baker. I’m a pastry chef and lifelong baker. I enjoy sharing my well-tested recipes with bakers of every skill level. Read more….