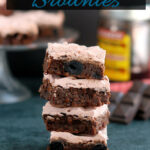 These are no ordinary brownies! They are perfectly fudgy brownies studded with luxurious Italian Maraschino cherries and iced with whipped White Chocolate Cherry Ganache. They are as pretty as they are delicious.

The impetus for this Chocolate Cherry Brownie recipe was two fold. First, a failed attempt at making a chocolate cherry shortbread cookie steered me in the direction of making a brownie instead.

Second, I’d bought a jar of Luxardo Maraschino Cherries after reading about them on the internet. People are absolutely gaga for them. I guess they’re used mostly for cocktails, but I didn’t see any reason not to bake with them.

I will say, they are pretty expensive. A jar of regular maraschino cherries in my local market is about $3, the same size jar of the Luxardo cherries is about $18. I know, crazy.

But, you know what? They do taste really, really good. Comparing regular maraschino cherries to these Italian gems is like comparing apples to caviar.

The Luxardo cherries have a totally unique flavor and texture that really brought these brownies to another level. For me the splurge was worth it. But don’t worry, I’ve listed alternatives to the Luxardo if you’d rather not spend the money.

I found Luxardo cherries with the cocktail mixers in my local market, but you can also find them on-line.

What if you don’t want to spend the money for Luxardo Cherries?

Italian Maraschino cherries can be found with the cocktail mixers in your local market. Since they are a little expensive, you can substitute regular maraschino cherries or dried cherries which have been soaked overnight in the liquor or fruit juice of your choice.

@Eileen Gray, yes, only Luxardo cherries, and that's what led me to your recipe. The extra juice/syrup is excellent in a spritzer, and the jar is just plain pretty. Thanks for your work.

Oops, thanks for pointing out that typo. It's been fixed. Do you use the real Luxardo cherries? They are expensive but sooo good.