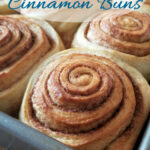 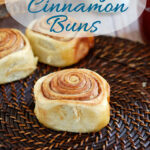 These Sourdough Cinnamon Buns are the best cinnamon rolls ever! There’s a bonus “sticky bun” layer at the bottom & cream cheese frosting on top. WOW!

Does anything in the world smell as good as freshly baked Cinnamon Buns? I know, stupid question.

I think we can all agree that even a bad cinnamon bun (aka cinnamon roll) is pretty good. But we can do better. Two things set this recipe apart from other Cinnamon Bun recipes.

First and foremost, the dough is made with sourdough starter instead of commercial yeast. If you love to bake bread but haven’t delved into the world of sourdough yet, I encourage you to dive-in head first.

You cannot imagine how a little sourdough starter enhances the taste and texture of any bread recipe. That’s a long-winded way of saying that these Sourdough Cinnamon Buns are extra yummy because of the starter.

Click through the slideshow to see how to assemble Sourdough Cinnamon Buns:

The other thing that sets this recipe apart is the result of a happy-mistake. Because I wanted lots of cinnamon sugar in the buns, I sprinkled a whole cup of sugar over the dough before rolling it up to form the buns.

This is an “overnight” recipe, so the assembled buns spend a night in the refrigerator. That’s great because you can do most of the work the day before and then bake the buns in the morning.

The first time I tested the recipe I found that during the overnight rest in the refrigerator some of the sugar “melted” and formed a syrup at the bottom of the pan.

But, hey, you know what? That syrup bakes up to form a sticky, gooey bottom layer on the buns, which is really quite nice. So I embraced the “mistake” and it’s now part of the recipe.

So it’s kind of a twofer recipe; sticky bun on the bottom and iced cinnamon bun on top. Who’s going to complain about that? Not me!

If you love this recipe as much as I do, please consider giving it a 5-star review. 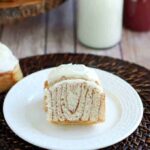 1. At this point you can wrap the log and freeze for up to 2 months. Defrost and then continue the recipe. 2. If you want to bake the buns the same day you can leave them at room temperature to rise at this point.

I used 100% hydrated starter and for some reason after I added the final 2 c. of flour (4 total), my dough was almost runny. Did anyone else have this issue?

Of you use cup measure for the flour you need to "dip and sweep" the cup into the flour bin to make sure you are sufficiently filling the cup.

I have made this several times and it is always wonderful! Most often I use poppyseed filling instead of sugar/cinnamon. I omit the egg wash and they turn out delicious! I also use cashew milk instead of regular whole milk. It’s what I usually have on hand and I find it performs so similarly to traditional dairy milk. I see you have a cook book. Does it include this and other sourdough recipes as well? Would love to purchase if so!!!

My book does not include sourdough recipes since it was written as a book of "easy" recipes for beginning and experienced bakers. Maybe if I can gear myself up to do another book I'll do a sourdough book.

Thank you for this recipe! It's so easy to follow, and the result is mind-blowing. Of course, it also depends on the starter, but I cooked these cinnabons many times, and it was always a success.

Yes, as with all sourdough recipes, the starter can make a world of difference in the results. Glad you enjoyed the recipe.

When we tried out this recipe, whilst the dough had been nice and soft and elastic, after baking the buns were lovely in flavour but a bit dense and dry in texture. Might this have been related to our technique when rolling the dough? We had used a rolling pin and were wondering whether we should have instead tried to pat/stretch it out by hand, in case using the rolling pin meant we lost the air in dough perhaps?

@Jalpa, The same thing happened to mine. What would cause the dough to over rise?

@Eileen Gray, thank you, that's really helpful- we'll give it a try again...thanks for getting back to us so quickly!

I love this recipe and have used it several times. Any chance I could get some tips on how to adapt into a pumpkin cinnamon roll? I don’t want to switch to another recipe I found, I just want to modify THIS ONE with pumpkin purée and some pumpkin pie spice.

Treat the pumpkin puree as a liquid. This is how I recently adapted my donut recipe to make a pumpkin donut. Try replacing the milk in this recipe with pumpkin puree. You may have to adapt the amount of flour to get the proper texture in the dough, adding a little more or less as the dough comes together.