My Pumpkin Mousse Pie is made with a crunchy graham cracker-pecan crust filled with light and luscious pumpkin mousse. You can add optional bourbon for a kick or use water for alcohol-free version. The pie is topped with a mountain of luscious toasted brown sugar meringue. 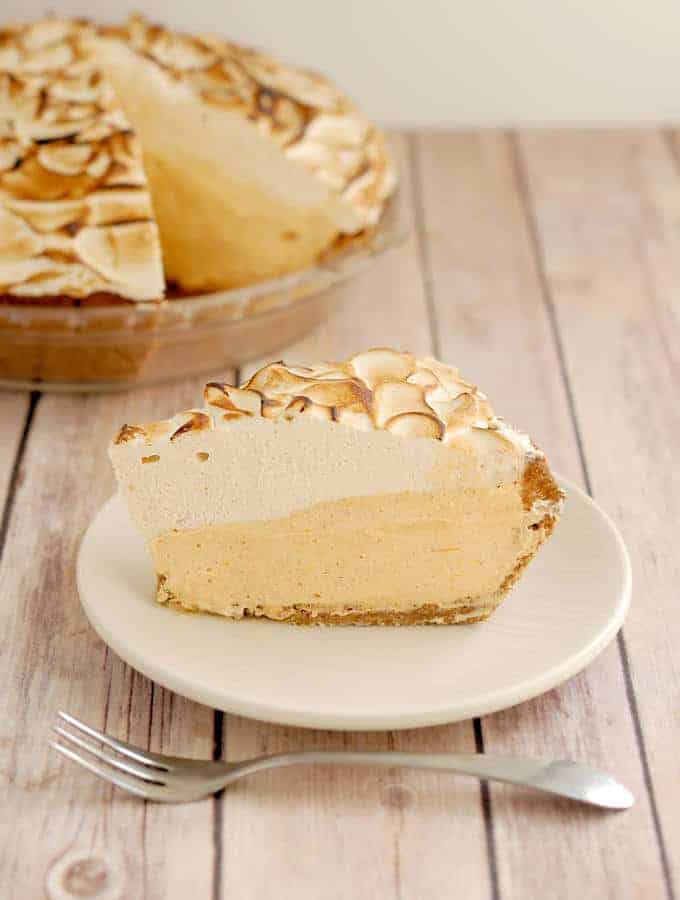 Before we get full-swing into the next season, let’s get one more pumpkin recipe under our belt, shall-we?

Pumpkin custard pie is great and all, but I will admit that I think the best thing about pumpkin pie is the mountain of whipped cream on top. Don’t you agree?

Well, let’s just cut to the chase and fold a mountain of whipped cream into the pie. While we’re at it, let’s top it with a mountain of….wait for it….toasted brown sugar meringue!!

This thing just keeps getting better, doesn’t it? 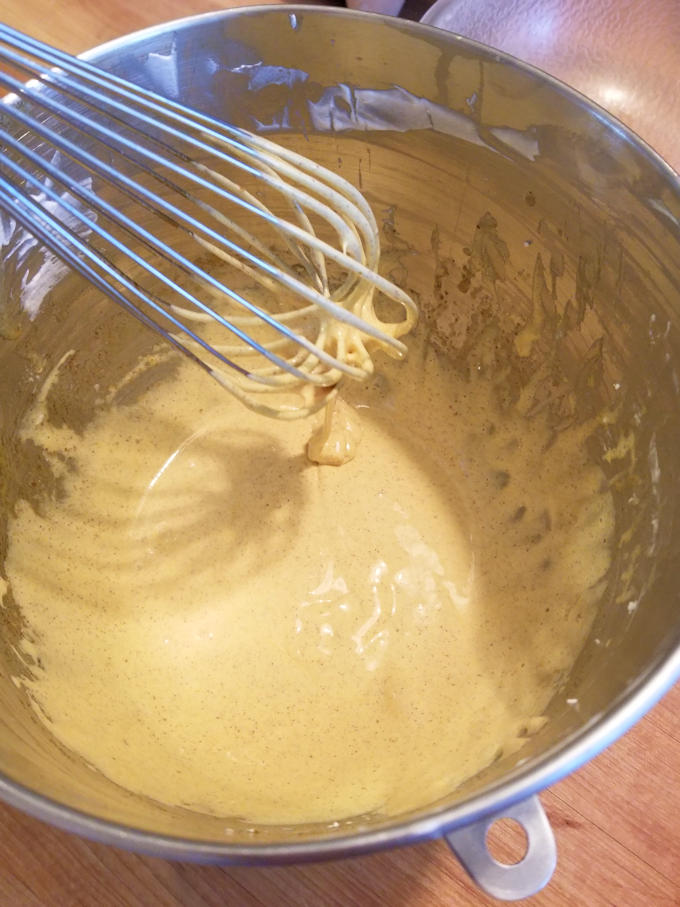 Ribbon the yolks, sugar and spices. 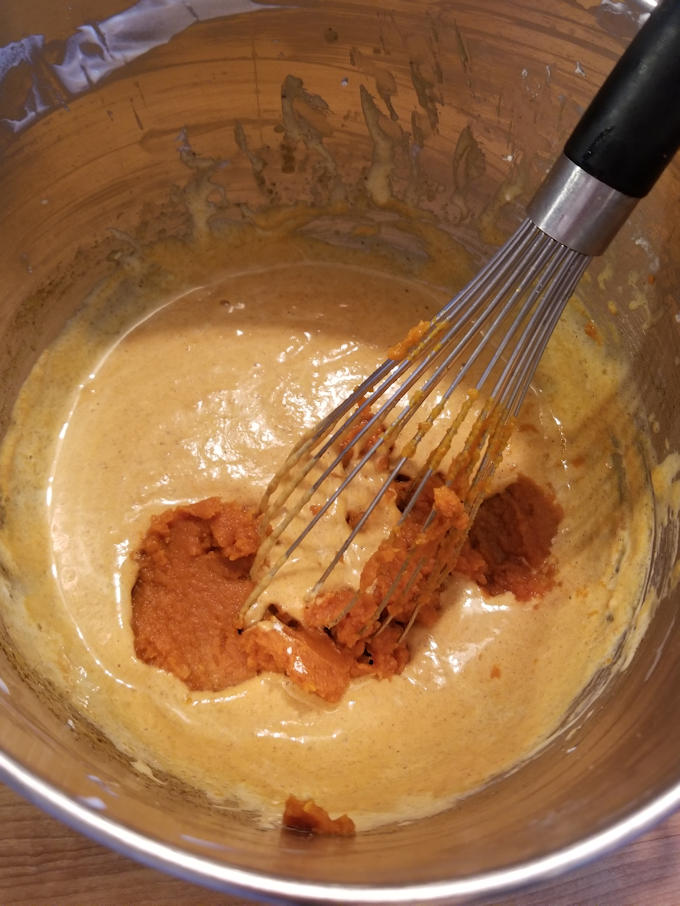 Whisk the pumpkin into the egg yolk base then add the cream and gelatin. 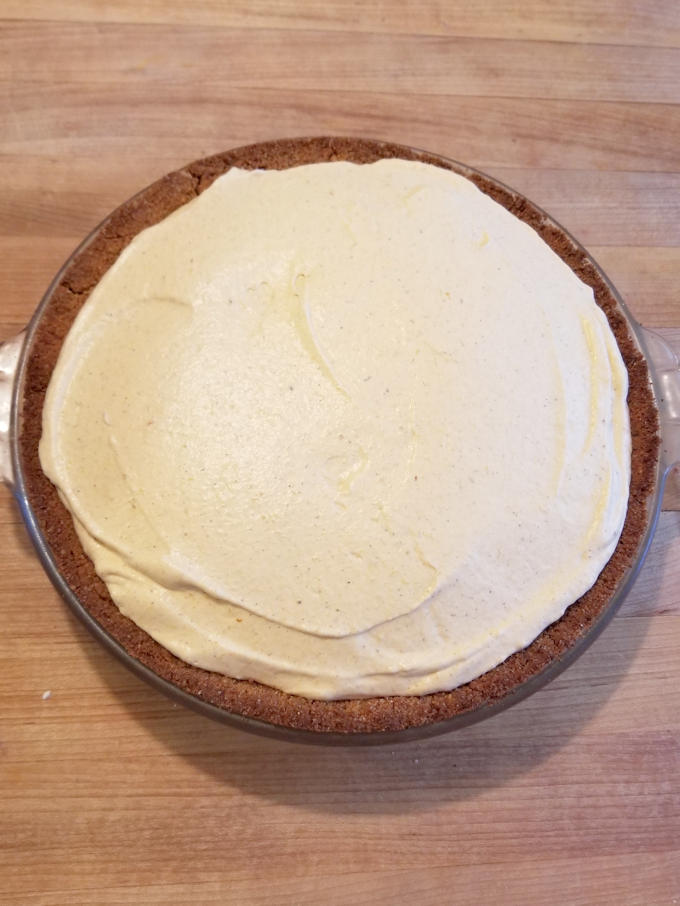 Spread the mousse into the pie shell and refrigerate until set.

This pie is a riff on my ultra-creamy, untra-light and ultra-delish Peanut Butter Mousse Pie. I set out to make a regular Pumpkin Pie for Thanksgiving but decided to make it a mousse pie instead. I intended to just replace the peanut butter in the original recipe with pumpkin and leave it at that.

Well, first I had to switch out the peanuts in the crust for pecans. Next I added a little bourbon and spice because, well, just because I wanted to.

I tasted the mousse and it was pretty good, but something was missing. The flavor was super subtle, which is not necessarily a bad thing. But what was missing was a little sugar. I’m honestly not a fan of super-sweet, cloying desserts. But I do want a minimal level of sweetness in a dessert.

I was contemplating remaking the mousse again with a little more sugar when I had one of those light-bulb moments. Rather than topping the pie with cream I would top the pie with meringue instead. 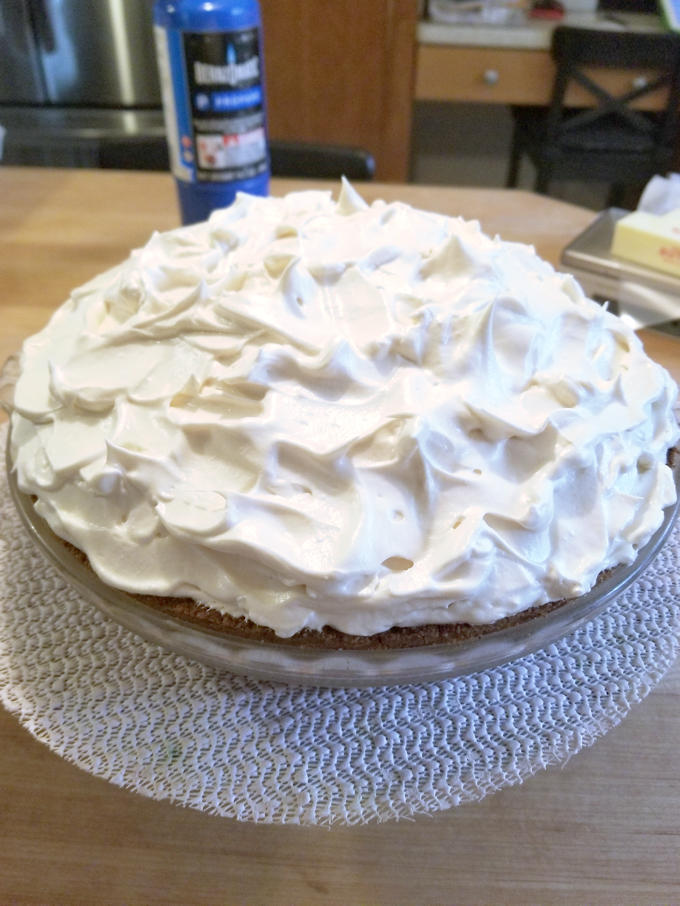 Mound the brown sugar meringue onto the pie. Use a blow torch or the broiler to brown the meringue. 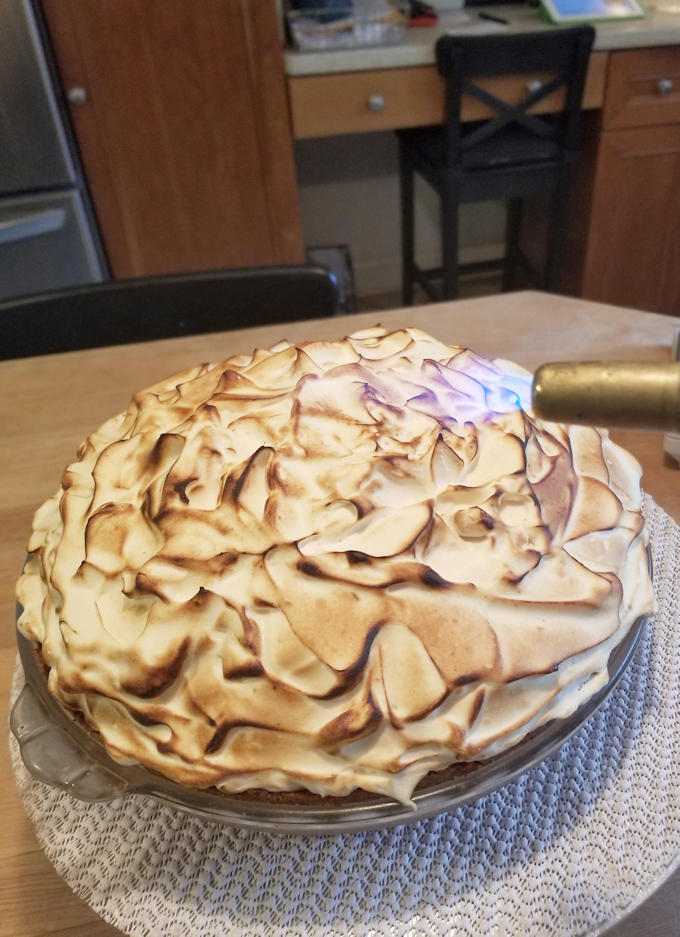 Because meringue needs a certain amount of sugar to stabilize, it is sweeter than whipped cream. It’s also much lighter and leaner. I wanted that extra sweetness to balance out the mousse filling. While I was at it, I added brown sugar, molasses and ginger to the meringue to amp up the flavor even more.

I absolutely love the result. I love that the subtle and not too sweet filling is in perfect balance with the toasted meringue topping. This will be my new go-to pumpkin pie recipe. Give it a try and I think it might be your’s too. 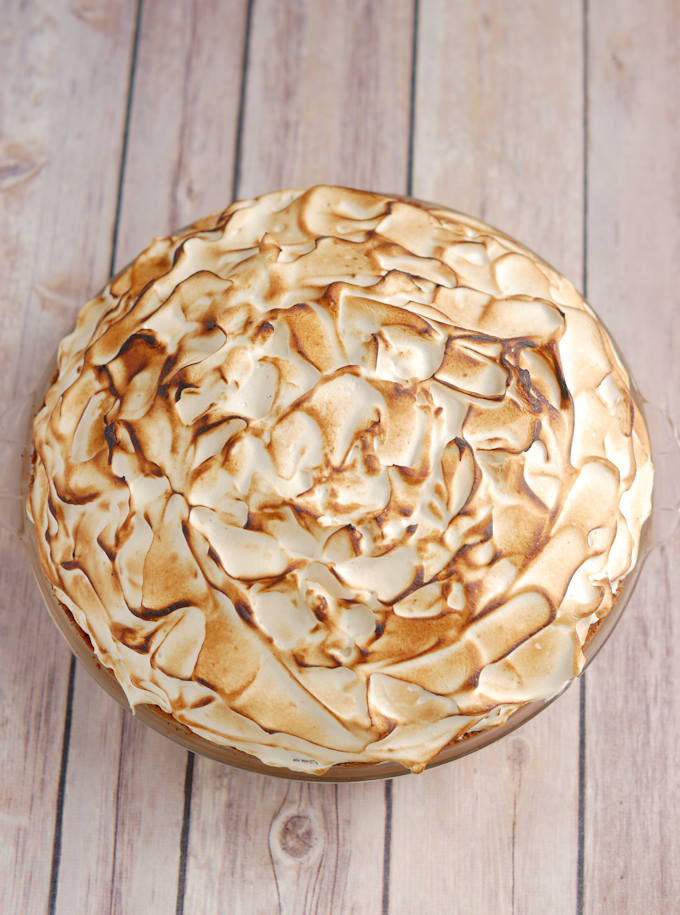 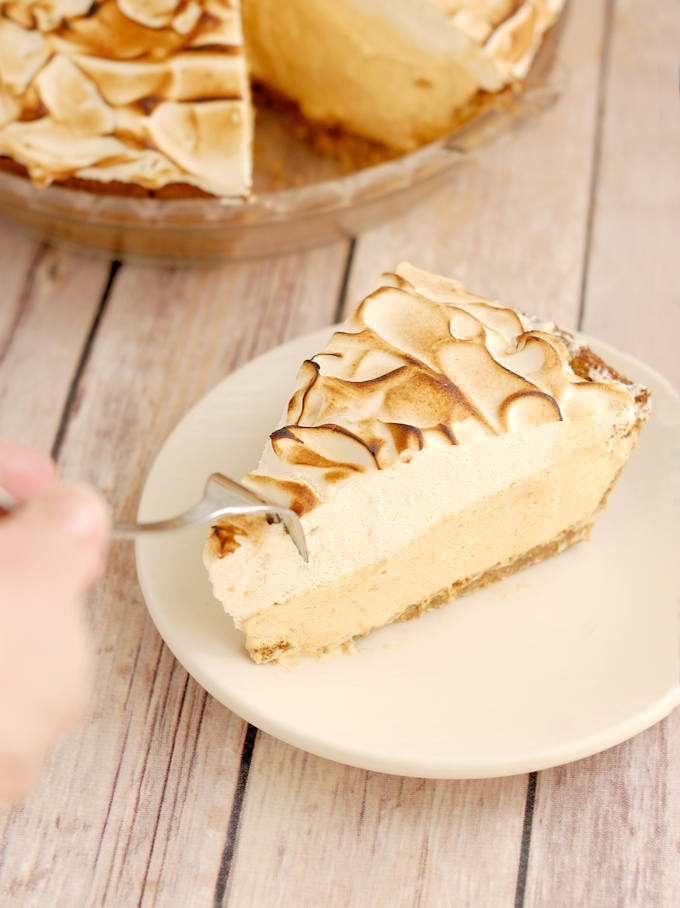 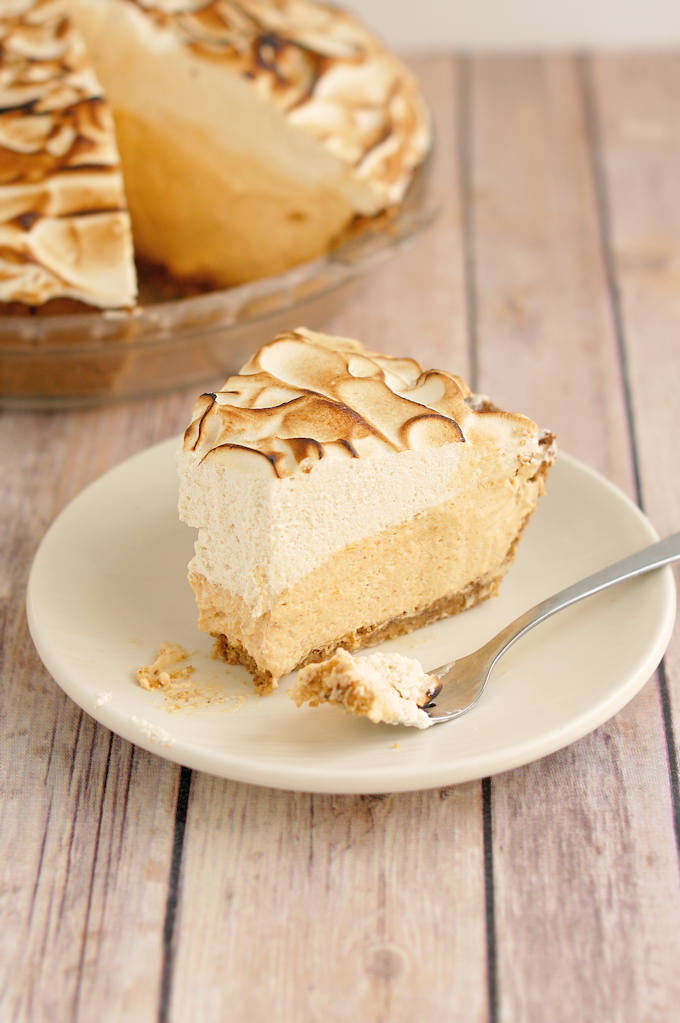 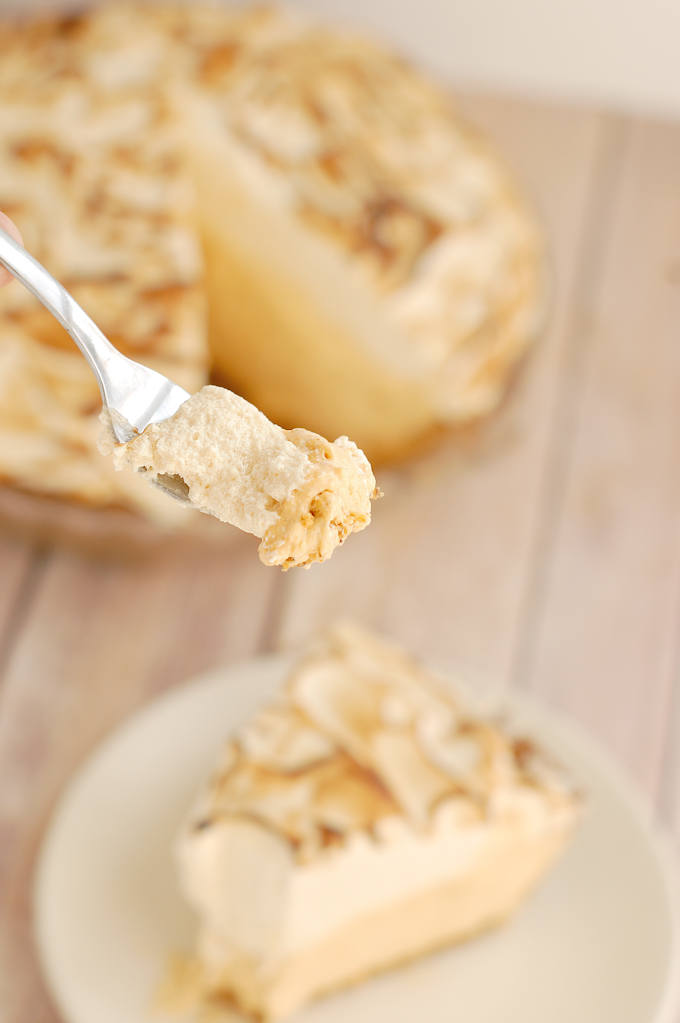 You can make the crust and mousse filling several days in advance. Pour the mousse into the shell and spread until smooth. Refrigerate until the mousse is set, then cover with plastic wrap up to 3-4 days. Make the meringue and top the cake up to 12 hours in advance. 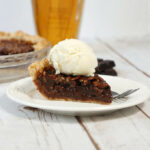 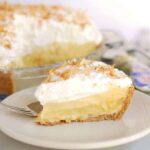 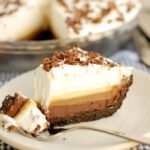 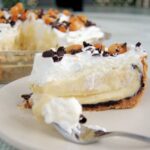 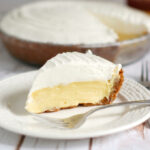 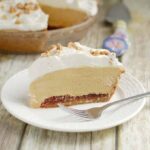 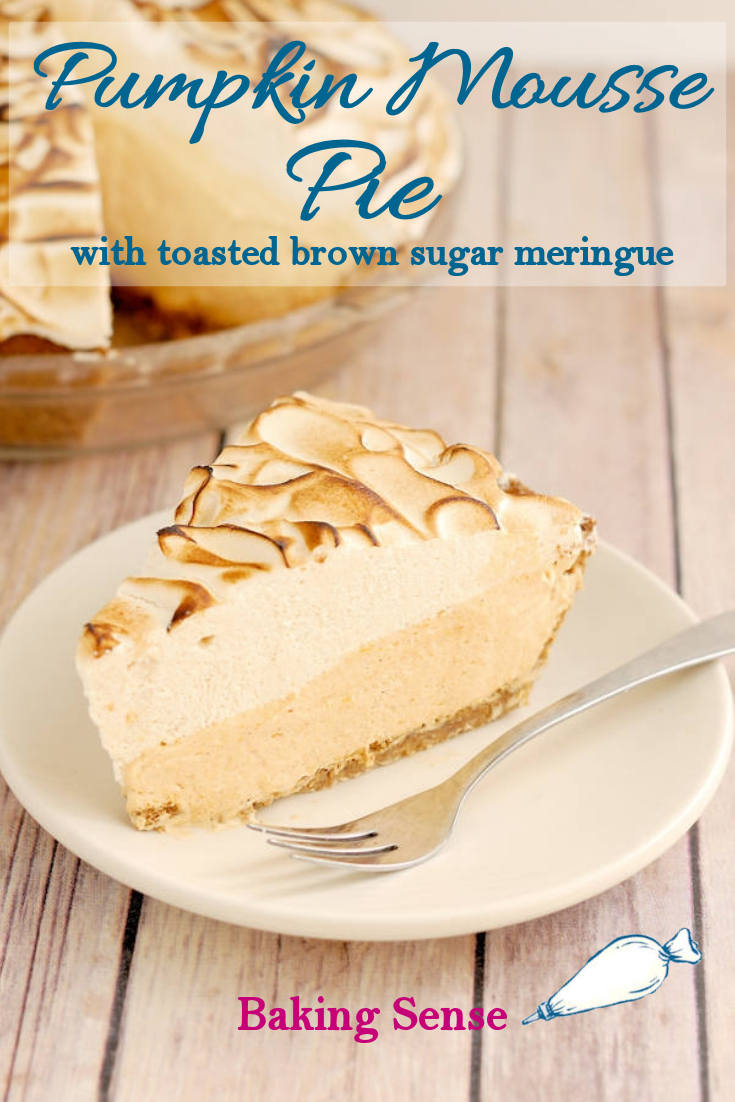