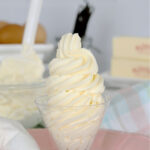 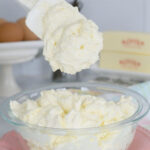 German Buttercream is less sweet than American Buttercream and a little easier to make than Italian Meringue or Swiss Meringue Buttercream. It’s rich thanks to the custard base of the frosting.

Why is this rich and creamy frosting called German Buttercream? Is this the national frosting of Germany?

Whatever the reason for the name, I love this style of buttercream because it’s not very sweet, it’s really quite easy to make and it has the most amazing “vanilla ice cream” flavor thanks to the custard base. It’s so good.

How to fix German Buttercream:

Because of the custard base, German Buttercream has a rich, ice-creamy flavor.

Can I tint German Buttercream?

How can I flavor German Buttercream?

Can I make German Buttercream in advance?

Yes, German buttercream can be stored at room temperature for the better part of a day, refrigerated for several days or frozen for up to 3 months. Bring the buttercream back to room a temperature and re-whip before using.

No, after 6-8 hours the buttercream should be refrigerated or frozen.

How much German Buttercream do I need for an 8″ cake?

Can I fix German Buttercream that is curdled or cracking?

If you love this style of frosting, I think you should try making German Buttercream’s American cousin, Ermine Frosting.

One batch of frosting is enough to fill and frost a 9" round cake.

Can I substitute the whole milk for anything?

@Eileen Gray, instead of using whole milk, could I use anything else?

Cam N I use half and half in place of the milk?

Yes, but it will be quite rich with that and the butter.

Hi, I love this recipe. I've only make the vanilla version. I would like to make this chocolate. I see that you say that melted chocolate can be added to do that. How much should be added and when? I'm concerned about it changing the firmness. Thank you!

I usually add about 3-4 oz of melted chocolate to a batch of buttercream. You can add it slowly to get to the color and flavor you like. Just make sure the chocolate is not too warm or you could melt the butter. Because the chocolate will firm as it cools it doesn't cause the buttercream to become runny.

Hi I see you said that it was able to sit at room temp for a day and then also said it is not shelf stable and needs to be refrigerated after 4 hours could you clarify thank you !

Sorry, I guess that could be confusing. By not shelf stable I mean that I wouldn't leave the frosting or a frosted cake out for several days. But certainly you could leave it out for the better part of a day until you're ready to ice and serve the cake. If I was going to serve the cake in the evening I would take it out early in the day to soften before serving. Then I would refrigerate any leftovers.