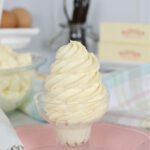 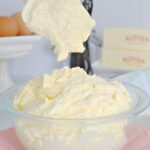 Classic French Buttercream is light, fluffy and not too sweet. This frosting is a dream to work with and will take on any flavor you’d like.

Ooh la la, let’s make some French Buttercream. This frosting is rich, yet light as a feather.

The difference is subtle, but the slightly yellow color and rich flavor make this a lovely filling and frosting for any cake where the frosting is the star. This recipe is pairs perfectly with Vanilla Butter Cake, Vanilla Genoise, Vanilla Chiffon Cake or Old Fashioned Buttermilk Cake.

How to fix French Buttercream:

What is the correct temperature for the sugar syrup in French Buttercream?

Can I tint French Buttercream?

No, after 4-5 hours the buttercream should be refrigerated or frozen.

How much French Buttercream do I need for an 8″ cake?

Can I fix French Buttercream that is curdled or cracking?

Now that you’ve made this recipe what should you do with all the extra egg whites? Check out this collection of recipes that use extra whites for some great ideas.

I absolutely loved this buttercream. I flavoured it with unsweetened raspberry puree and the resulting cake was a dream. I chose this buttercream because it used the yolks leftover from the cake recipe. My husband and I both love the taste of butter, we didn't find it too buttery at all. It was rich, creamy, smooth and not too sweet. I used organic butter and I think it was worth it. So thank you! I'm looking forward to trying one of your meringue buttercreams next!

Hi! Is it just the lighting on the photo or does it turn as white as you have in the photo? I need a French buttercream recipe in its palest yellow shade. Thank you.

It is a pale yellow shade.

Everybody complained that it tasted way too much like butter. Like pure whipped butter. Was a pound of butter in your recipe an accident? My mom said either that or that maybe 1 cup of sugar wasn’t enough for 4 whole sticks of butter. Let me know please