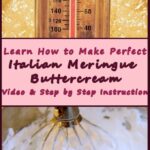 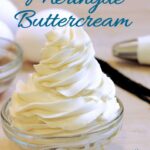 Italian Meringue Buttercream (IMBC) is my favorite cake frosting. This is the exact recipe I used for 10 years in my wedding cake business.

Meringue buttercream has the perfect balance of rich flavor from the butter, and lightness from the meringue. It’s not overly sweet and it can be flavored with an endless variety of add-ins. It’s strong enough to pipe buttercream roses and stays soft at room temperature so it melts in your mouth.

This is a fairly standard Italian Meringue Buttercream recipe except for the temperature of the sugar syrup. I’ve seen a lot of recipes that have you boil the syrup well into the firm ball stage (248°F), but I find this makes a buttercream with a texture that is too tight and marshmallow-y.

I like to boil the syrup to the softball stage (235°-240°F) for a slightly softer buttercream, and I think it whips up a little lighter. Also, don’t forget that even when you take the pan of syrup off the heat the temperature will continue to rise.

Waiting until 248° might mean your syrup is over 250° by the time you begin pouring it into the egg whites.

What’s the difference between soft ball and firm ball syrup? It’s the amount of water in the syrup. The higher the temperature of the syrup, the less water there is relative to sugar. So using a soft ball syrup means there’s a little more water in the buttercream.

But Italian Meringue Buttercream can take quite a bit of liquid without breaking down. I often add rum, limoncello and other liquid flavoring to the buttercream with no adverse effect on the texture.

The scariest moment for those who’ve never made a meringue based buttercream is when the butter goes in. The whole thing kind of breaks down and then comes back together.

It might sound scary and complicated, but it’s really not. There’s a lot of leeway with the temperatures and the buttercream will almost always come together.

How to fix Italian Meringue Buttercream

As I said, this is my favorite buttercream. But I also love Swiss Meringue Buttercream, which is very similar to IMBC except that you warm the sugar and eggs over a water bath rather than making a sugar syrup.

If you want a buttercream that is just as light and airy as a meringue buttercream, but with a slightly richer flavor and color, try making classic French Buttercream. It’s made with egg yolks instead of egg whites.

If the buttercream becomes "spongy" while standing re-whisk to correct the texture. The buttercream can be refrigerated 3-4 days or frozen for several weeks.

Return to room temperature and re-whisk before using.

Hi have made this a few times and it is lovely. I would like to make it with chocolate for my Grandaughters birthday cake. How and when do I add chocolate? Thank you

After the buttercream is finished whipping, slowly add melted (but not hot) chocolate. I usually use about 3-4 oz per batch of buttercream.

Hi Eileen! How many batches should I make to cover a half sheet cake? Just to cover it

If you are not filling the layers but only icing the outside I think 1 batch should be enough.

WOW thats next level love it

Have you ever added fruit to the buttercream? I’m looking to make this but with strawberry, what to you think?

You can add fruit puree. But strawberry does have a very subtle flavor that is hard to come through on the buttercream. For strawberry buttercream I prefer to use ground up freeze dried strawberries. You get all the flavor without added water.

Hello, the two time's I've made italian meringue buttercream it looked perfect the day I make it, but then when I went to use it the next day after having kept it in the fridge in a piping bag, it came out looking grainy and wet both times, similar to the state you say it can't be fixed. I'm wondering what I'm doing wrong and how I can prevent this?

@Eileen Gray, Thank you so much it worked!!

If the buttercream separates and looks curdled when you are making it because the butter is too warm and the syrup is too hot that can't be fixed. But what you describe can definitely be fixed. After the buttercream has been chilled you need to bring it back to room temperature and rewhip it before using. It comes back together beautifully. If you just want to hold it for a day, it can be held at room temperature (unless the room is really warm).