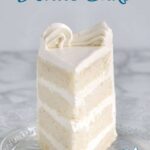 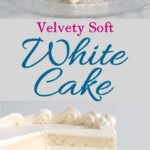 This White Cake is soft and velvety with perfect vanilla flavor.

Have you ever taken a bite of a beautiful white cake only to be disappointed by it’s rubbery texture and bland taste? With the proper ingredients and mixing technique you can make a great White Cake at home, from scratch.

A reader told me she’d gotten some bad advice on the internet (shocking!) about making substitutions in a cake batter. She wanted to make a moist white cake, but her first attempt was a failure.

I gave her some suggestions to adapt my Vanilla Butter Cake recipe and she got a better, but not perfect, result. So of course this got me thinking that it was time to get in the kitchen and run a few experiments. Yipee!

I love a good kitchen experiment, so I’m always happy to have an excuse to take apart a recipe and tweak it to get the desired outcome.

How to make the best Classic White Cake.

I did extensive research and testing into what makes a good cake recipe for my “Cake Batter”  series. I knew that information would help me create a really soft and tender white cake that still had good vanilla flavor.

I detailed exactly how I use the Baker’s Formula create my cake recipes in this post. Take a look, there’s tons of really great information.

What the difference between white cake and vanilla cake?

I did 5 recipe tests to make the best Classic White Cake:

The first change I made to the Vanilla Cake recipe was to eliminate the yolks and use more whites; 6 egg whites instead of 6 yolks+3 whites.

I kept the sour cream in the recipe because it tenderizes the cake, adds flavor and of course does not interfere with the white color.

For the first 3 test cakes I changed how I mixed the ingredients together. Mixing technique can make a BIG difference in a cake’s texture.

Check out the “Cake Batter Mixing Methods” class to find out why I use the “Reverse Creaming” technique for my butter cakes.

You can see the difference in the first three cakes in the photo. The cake made with liquid whites had a very tight crumb and the cake with whipped whites had a lighter, more open crumb.

But even more importantly, the cake made with the whipped whites was much softer and more velvety than the other two cakes. That’s not really surprising.

Whipping egg whites has the same effect as cooking whites- the proteins unfold, reattach and trap water. Since whipped whites are already partially “cooked” they don’t contribute as strongly to the structure of the cake.

In my testing for the “Eggs in Cake Batter” class, I found that a cake has a softer texture when the whites were whipped and folded into the batter.

One other note on the egg whites, if you see in the recipe video the whites hold a peak but are not stiff and dry looking. If you over-whip the whites they won’t rise as well and you’ll loose some volume in the cake.

Ok, now that I had the technique down, I wanted to see if making changes to some of the other ingredients could change the color or texture of the cake.

Next I would focus on the other “yellow” ingredient in the recipe, the butter.

Testing the best fat to use for a classic white cake:

So it’s butter for the win, again!

(If your butter has a very yellow color you can substitute all or some of the butter with shortening to get a whiter crumb. The butter cake tasted better, but the others tasted good. Once they’re filled with buttercream the difference would be less noticeable.)

So, there you have it! A beautiful classic white cake that tastes as good as it looks. It’s moist from the sour cream and tender because of the mixing technique.

Keep those questions coming! I love them!

I love to fill and ice Velvety Soft White Cake with snow-white Ermine Frosting. You can get the recipe for Ermine Frosting in my new book: Easy Baking From Scratch: Quick Tutorials, Time-Saving Tips, Extraordinary Sweet and Savory Classics .  Order it on Amazon today.

By: Eileen Gray
It is possible to make velvety, soft white cake from scratch. How you mix the cake makes a big difference. By using the reverse creaming technique you’ll get a white cake with a tender and moist crumb.
Prep Time30 mins
Bake Time25 mins
Total Time55 mins
16 servings
Prevent your screen from going dark

Room temperature butter is between 65°F and 70°F. It should be slightly pliable but not soft and melting. Do not use pasteurized egg whites as they may not whip up properly. The assembled cake can be kept at room temperature for several days (unless it has a perishable filling). Un-iced, the cake can be wrapped in two layers of plastic wrap and frozen for several months.

Can I double these ingredients exactly to make 3 layer 8" cake?

Unless you want the cake to be extra tall there's no need for double the ingredients. You can bake the batter in three 8" pans. I usually bake this batch in two 8"x3" pans and split each cake for a 4 layer cake.

Hi I would like to make this into a rainbow cake 8”x 6 thinner layers to make about 7” tall would I divide this recipe or make more?

The base recipe fills two 8"x3" cake pans. The resulting cake is usually about 4" tall when filled and iced. So if you want a 7" tall cake you'll probably want to double the recipe. Each batch of cake could be baked as three 8" layers, each a different color. To tint the batter I would divide the batter into three before folding in the egg whites. Tint each 1/3 of the batter then fold 1/3 of the whipped whites into each color. If you tint the batter after folding in the whites you'll deflate the whites.

My first time making a home made cake. Was delish! I saw on a youtube site to wrap cool/moist paper towels in an aluminum foil skirt around the cake pans, to keep everything from going brown and to keep from having a "dome/cap" form, so I did that and my cakes were white, and had no "dome/cap"!

Can I use this fir a wedding cake?