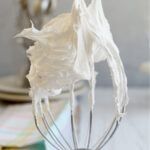 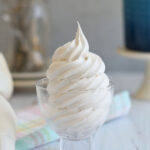 Seven Minute Frosting is an old-fashioned recipe that should never go out of style. It’s sweet. It’s fluffy. It’s a veritable cloud of a frosting. Even better, you need just a handful of pantry ingredients and about 7 minutes to make this recipe.

Old recipes instruct you to whisk the egg whites over simmering water for 7 minutes until they’re at full peak. Hence the name, “Seven Minute” Frosting.

Rather than standing over a pot of simmering water for a full seven minutes, I heat the egg white mixture to 160°F, then take it off the heat.

At this temperature the egg whites are in the safe zone to kill any bacteria. Also, the sugar is melted and the whites are coagulated for a stable meringue.

I finish whipping the whites on my stand mixer until they are cooled and at stiff peak. That takes about 4-5 minutes.

All told, it still takes about the same amount of time. I just prefer not to stand over the stove the entire time. With a stand mixer those last 4-5 minutes are hands-off and you get a little more volume.

Scroll through the photos to see how to make 7 Minute Frosting with a stand mixer:

This is the perfect frosting for Lemon Meringue Cupcakes!

If you love this light and fluffy frosting you should try making Swiss Meringue Buttercream. It’s exactly the same, but with the addition of butter.

If I frost the cake today (Wednesday) - can I serve it Friday?

You can, but the icing can get sticky and loose some volume after a day or two. What type of cake? Will it be refrigerated?

Can an equal measure of vinegar or lemon juice be used in place of the C of T? Thanks.

Yes, or you can go without any acid and it will be ok.

I currently don't have a way to get my hands on fresh eggs. Should I wait to try this recipe until I can? Or try it without eggs from the carton, knowing it will be sub par?