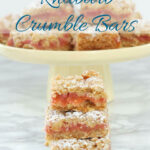 When rhubarb is in season, Rhubarb Crumble Bars are the perfect treat. They’re easy to make and very tasty. Buttery oatmeal crust is layered with sweet-tart rhubarb filling and topped with chunky brown sugar topping.

Sometimes, even the simplest recipes take several tries to get it exactly right. This is one of those recipes.

As soon as I see rhubarb in the local market I buy a big bunch before I even know what I’m going to do with it. It doesn’t matter. I love rhubarb so much that I buy it first and figure out what to do with it later.

Rhubarb Pie is an old favorite and shows up regularly on our table in spring and early summer.

Rhubarb Summer Pudding looks fancy, but it is incredibly easy to make with store-bought white bread. Rhubarb Crumb Cake can be enjoyed for breakfast or dessert.

Last year I created one of my favorite new rhubarb recipes, Rhubarb Fritters. If you’ve got some fresh rhubarb and are ready to go off your diet, I hightly suggest making these big beautiful hunks of fried dough.

I have a tried and true Raspberry Bar recipe that I’ve used for years. I assumed it would be easy enough to simply replace the raspberry jam with rhubarb and call it a day. Well, you know what they say, never assume…

I made a quick rhubarb filling and layered it with my chunky, brown sugar/oatmeal crumble. I baked it up, and the bars tasted good. I mean, they were just fine.

But, just fine isn’t good enough. I wasn’t quite happy with the recipe. The rhubarb got a little lost in the crust, and this recipe is all about the rhubarb.

I can tell you that I don’t phone it in. I really want a recipe to be the best possible version before I post it for you. So, as tempted as I was to post the recipe without making it again, I had to give it another go.

Since the rhubarb was melding into the crust, I decided to bake the bottom crust before adding the rhubarb. I hoped that would keep the rhubarb layer intact.

It worked. The second batch of bars was much better. The bottom crust is crunchy and the rhubarb layer is very distinct. Sometimes, just a small tweak makes all the difference.

Watch the recipe video to see how to make Rhubarb Crumble Bars.