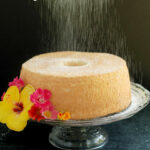 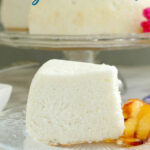 Light as a feather, not too sweet, tender and moist Angel Food Cake is possible with the right ingredients and, especially, with the right technique. 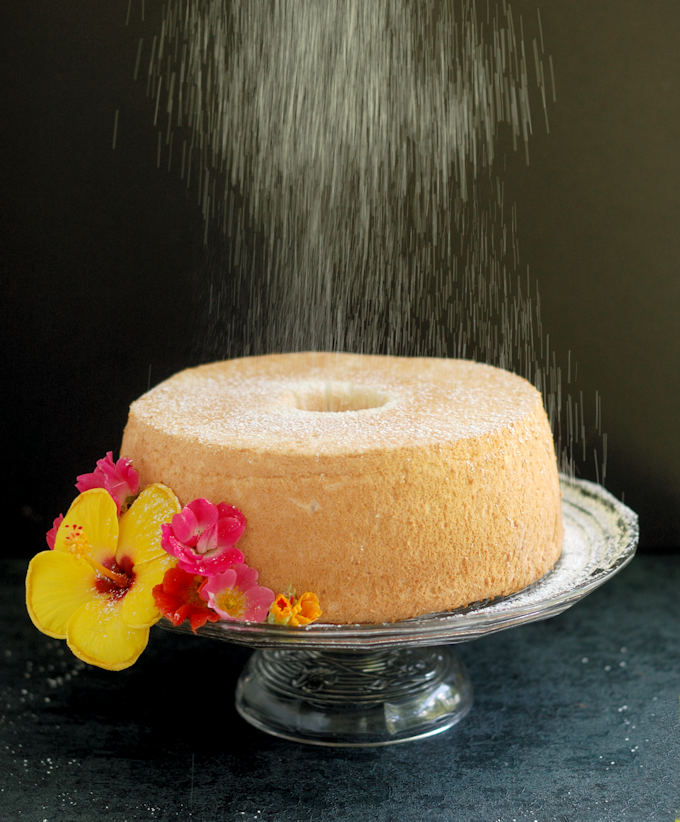 It had been years and years since I made an Angel Food Cake. It’s not a cake used in wedding cakes, so I never baked them for my cake business.  My memory of Angel Food Cake was generally of a rubbery, overly sweet and bland cake. No wonder I wasn’t anxious to bake one.

Well, not any more. Despite baking and taste testing this recipe 8 times, I’m not sick of this cake at all. I think the simple flavor of this cake is what I’m attracted to at this point. It’s the perfect partner for fresh, seasonal fruit, which is pretty much my favorite food.

The catalyst for my Angel Food Cake experiments was a question I asked in my Facebook Group (ask to join and I’ll add you to the group). The question was “What is one baking technique or recipe that consistently gives you trouble?” A number of members mentioned Angel Food Cake.

Coincidentally, I happened to have a whole bunch of frozen egg whites (leftover from my month long celebration of ice cream) taking up space in my freezer. It was the perfect time to bake a whole bunch of Angel Food Cakes.

Ok, so before we do anything else, lets talk about the egg whites. You’ve got to use fresh egg whites, not pasteurized egg whites from a carton. As you can see from this label, pasteurized whites can’t be used for making meringues or angel food cake. 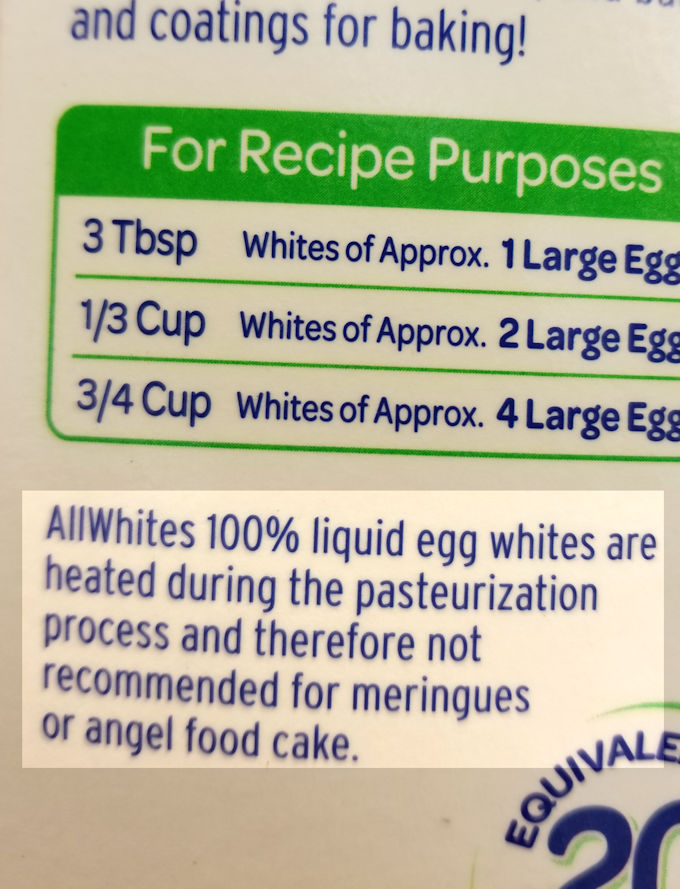 I know it’s a bit of a pain to end up with a dozen yolks left over, but the yolks can be frozen. You can also use fresh frozen whites since they are not pasteurized.

How I created a great Angel Food Cake recipe:

I set out to find out where the pitfalls might be in baking a great Angel Food Cake. The first step was to come up with a basic recipe. A little research showed that almost all the published recipes are very similar. So that was my starting point.

The first small change I made was to add a little water to the batter. When I was making the white sponge cake for my Peppermint Stripe Cake Roll, I found a little water softened the cake and prevented it from becoming rubbery. I baked my new recipe once and knew right away that it was a good one.

Time for the fun part, my fellow baking geeks. This is when we start experimenting. Let’s break this recipe to see why it works.

Switching out the sugar: 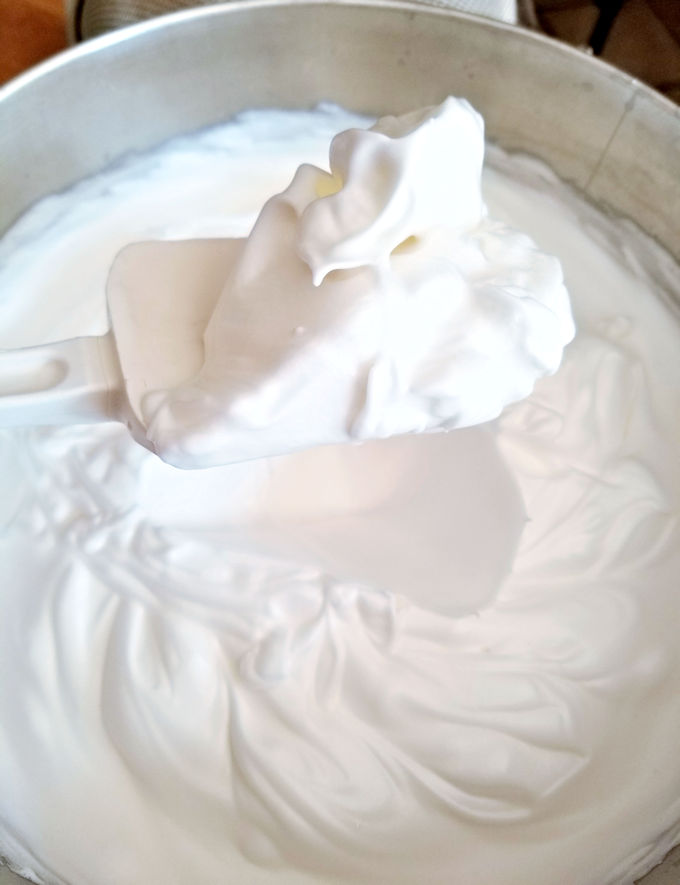 Whipping the meringue for 8-10 minutes on medium/medium high speed resulted in a silky meringue. 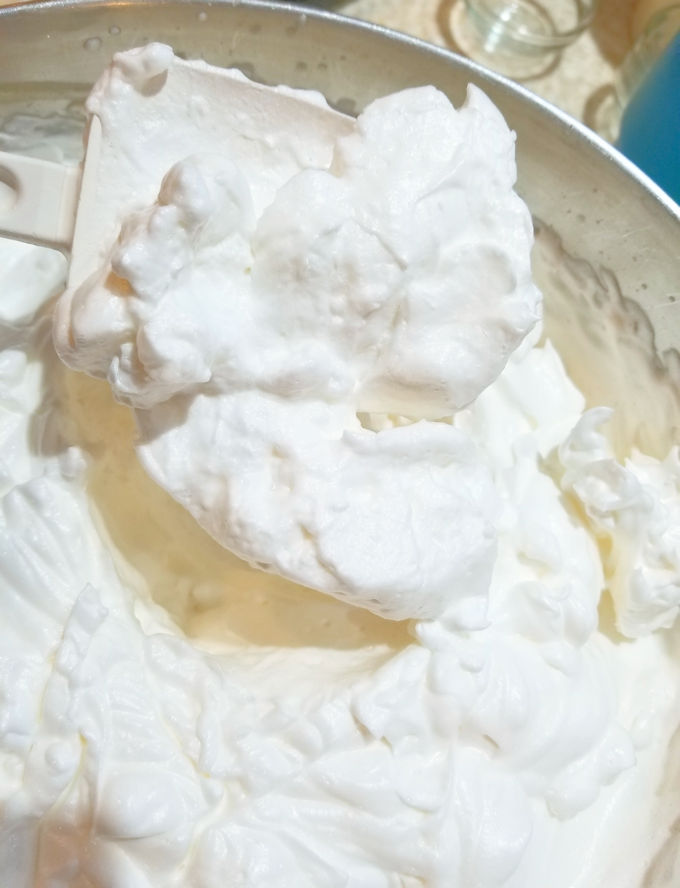 Whipping the whites on high resulted in a meringue with large bubbles and a cake with coarse texture.

I also did a test using a hand mixer rather than my stand mixer. I’m sorry to say, but the texture of the cake made with hand mixer was a little more rubbery than the original cake. If you only own a hand mixer you can make a pretty good cake anyway. But in all honestly, the stand mixer does a better job.

Over all the Angel Food Cake experiments, the most drastic difference happened in the last test.

How to cool the cake: 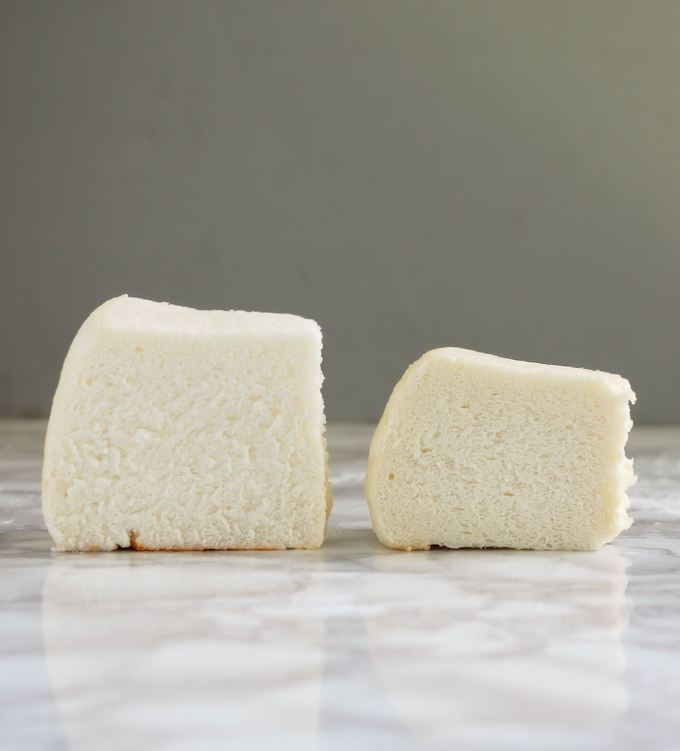 Ok, I know that was A LOT of information. So here’s a handy list of Angel Food Cake do’s and don’ts: 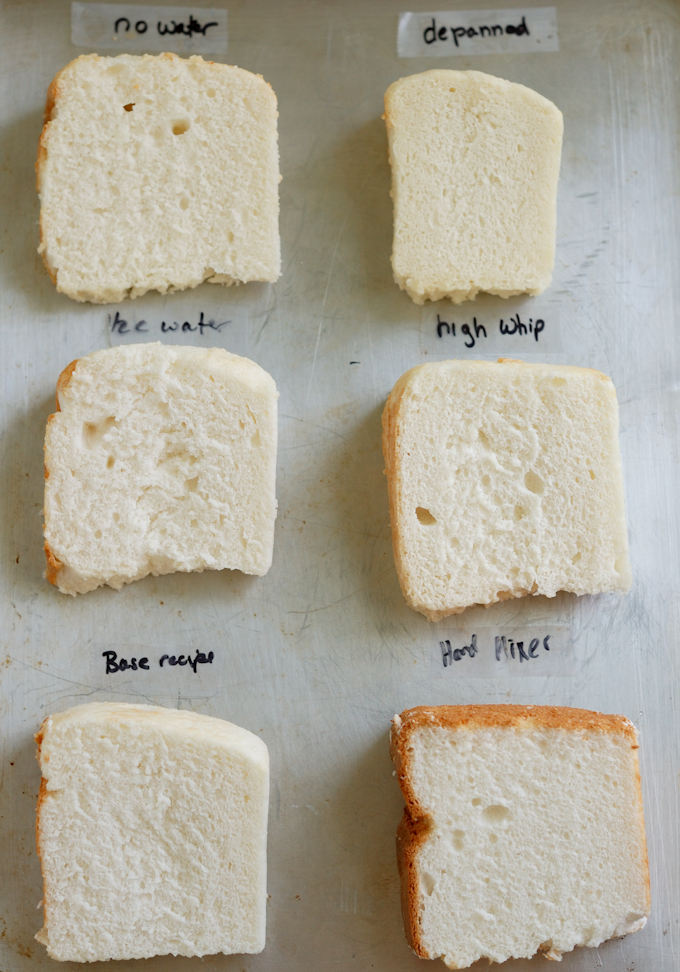 The cakes from all my experiments. The base recipe made the best cake. 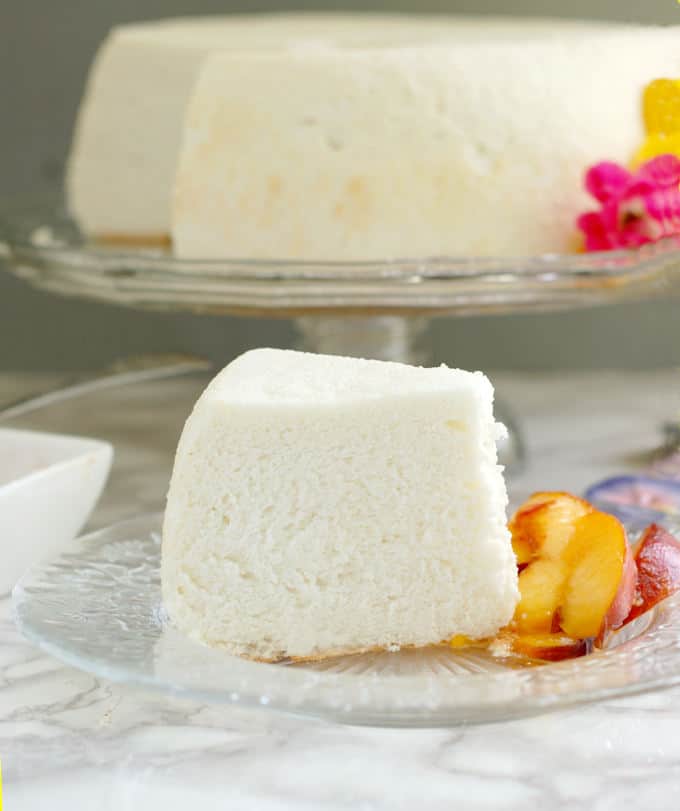 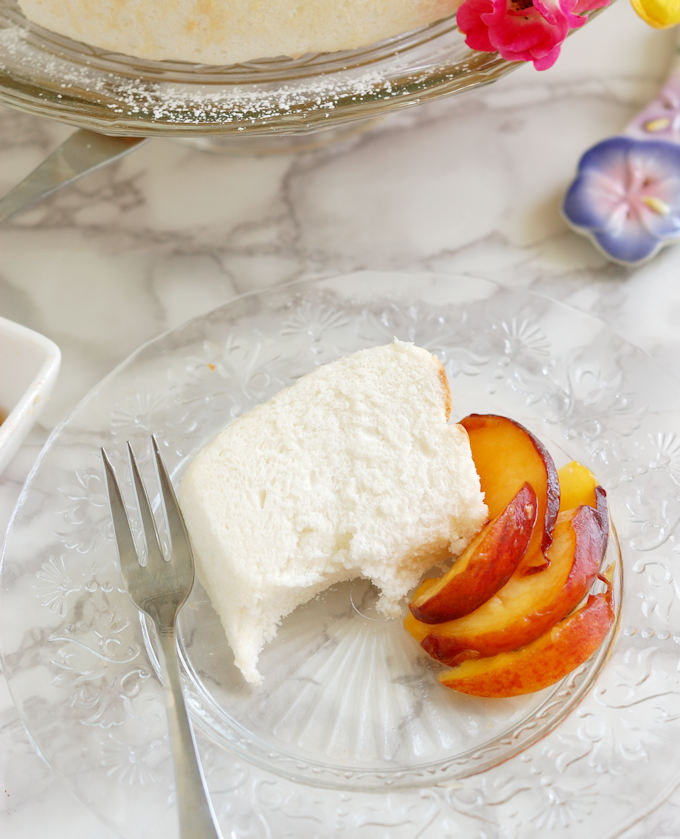 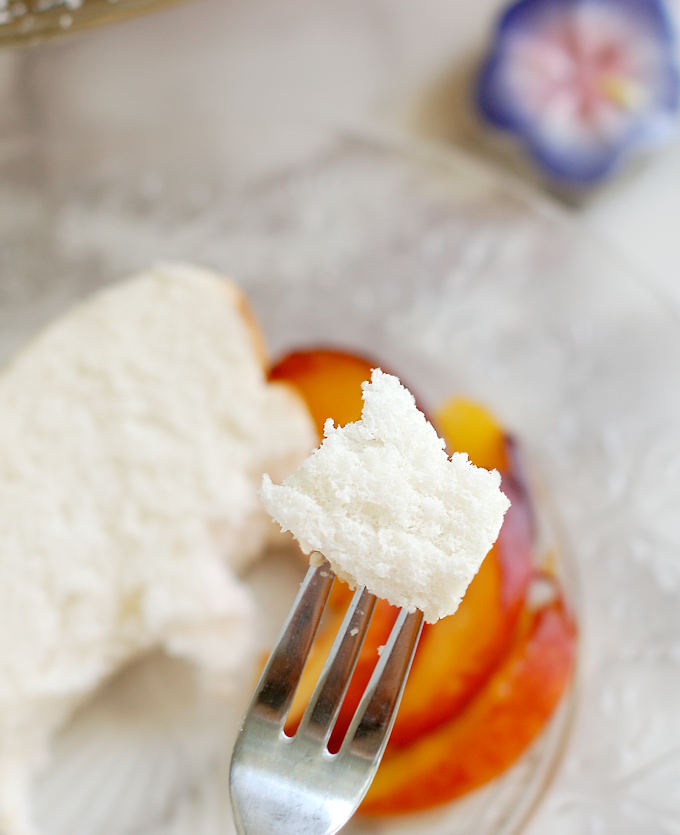 Do you think everything is better with chocolate? Then check out my Chocolate Angel Food Cake recipe.

Watch the recipe video to see how to make a perfect Angel Food Cake.

If you love this recipe as much as I do, please consider leaving a 5-star review: 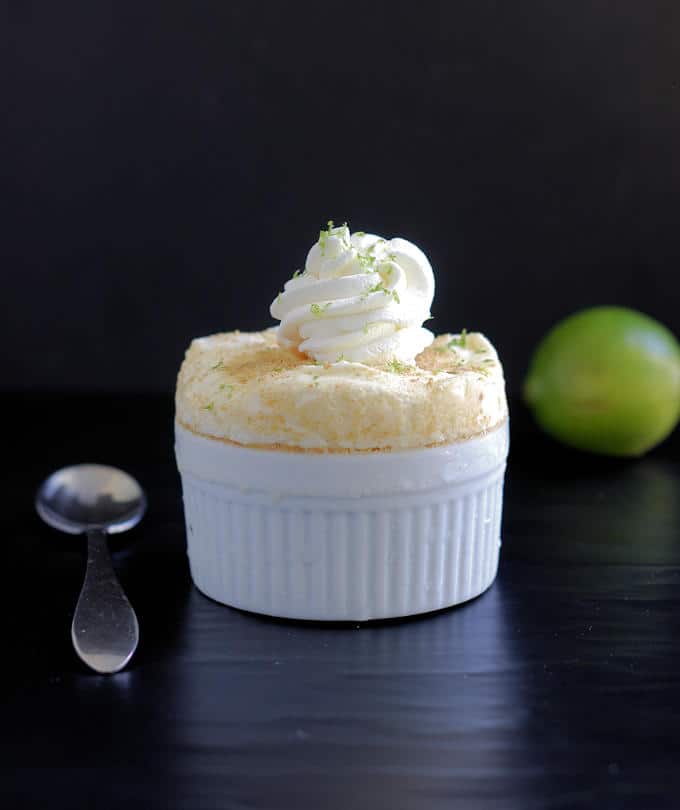 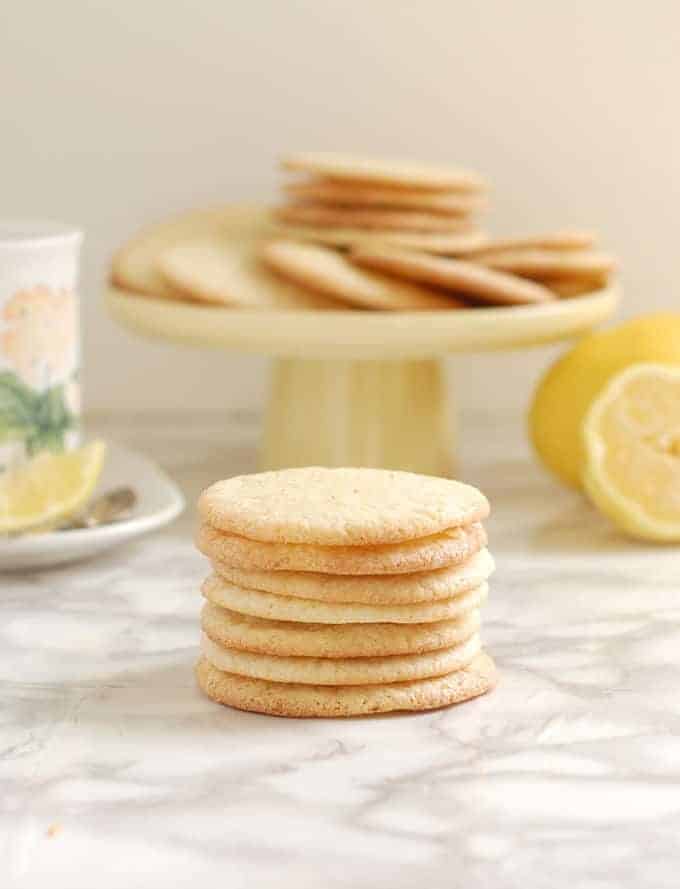 Have you ever had issues with this cake smelling too eggy? It came out really well with a nice, light texture, but smells very strongly of egg compared to other angel food recipes I've tried.

What size pan did you use? I always thought the footed angel food pan came in just the one size, but a quick google revealed a few sizes.

A quick tip for people without the footed pan, you can invert your pan, keeping it above the bench by placing the centre hole over a narrow necked bottle.

It fell . My egg whites whipped beautifully, everything was gorgeous and light when it when into the oven and the sunk to about half the height?! Any idea where I went wrong??

Did you grease the pan? Are you using a tube pan?

Could I cut this recipe in half? I made creme brûlée with 6 egg yolks so I’m trying to figure out what to do with the remaining egg whites?

I haven't tried it, but I'm guessing if you have an Angel Food pan you could just make a shorter cake. If you try it let us know how it works out.

Thank you for recipes in weights!!