Layers of silky brioche dough are filled with cocoa, cherries and almonds, then topped with cream cheese frosting. Chocolate Cherry Almond Brioche Buns are indulgent, but they’re totally worth the work and calories 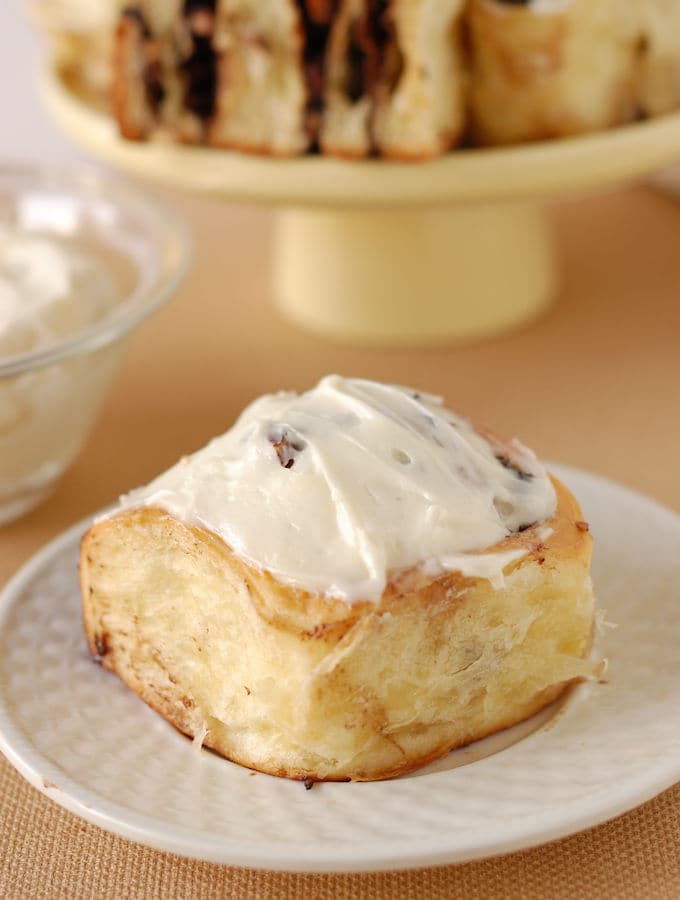 I knew I wanted to do a sweet bread based on a brioche dough, but had a bit of a time finding my way to making Chocolate Cherry Almond Brioche buns.

My first thought was to make chocolate brioche studded with dried cherries. I don’t mean a brioche filled with chocolate, but a brioche with cocoa in the mix to create a chocolate dough.

My attempts were not bad, in fact the bread tasted good. The bread had a striking chocolate-brown color and great texture, but the flavor was deep, dark and a bit bitter. It was quite a nice bread, but didn’t fit in with the “sweetened” theme.

I tried adding more sugar but it just was not working out as I had it in my head. I’ll revisit that idea another time because I’m still intrigued, but not for today.

How to make Chocolate Brioche Buns:

I kept the chocolate element, but instead made a cocoa sugar that I rolled into the dough along with chopped dried cherries and chopped cocoa covered almonds. These Chocolate Cherry Almond Brioche Buns are a chocolatized version of cinnamon buns. How could that be a bad thing?

If you’ve never made brioche before here are a few pointers for success: 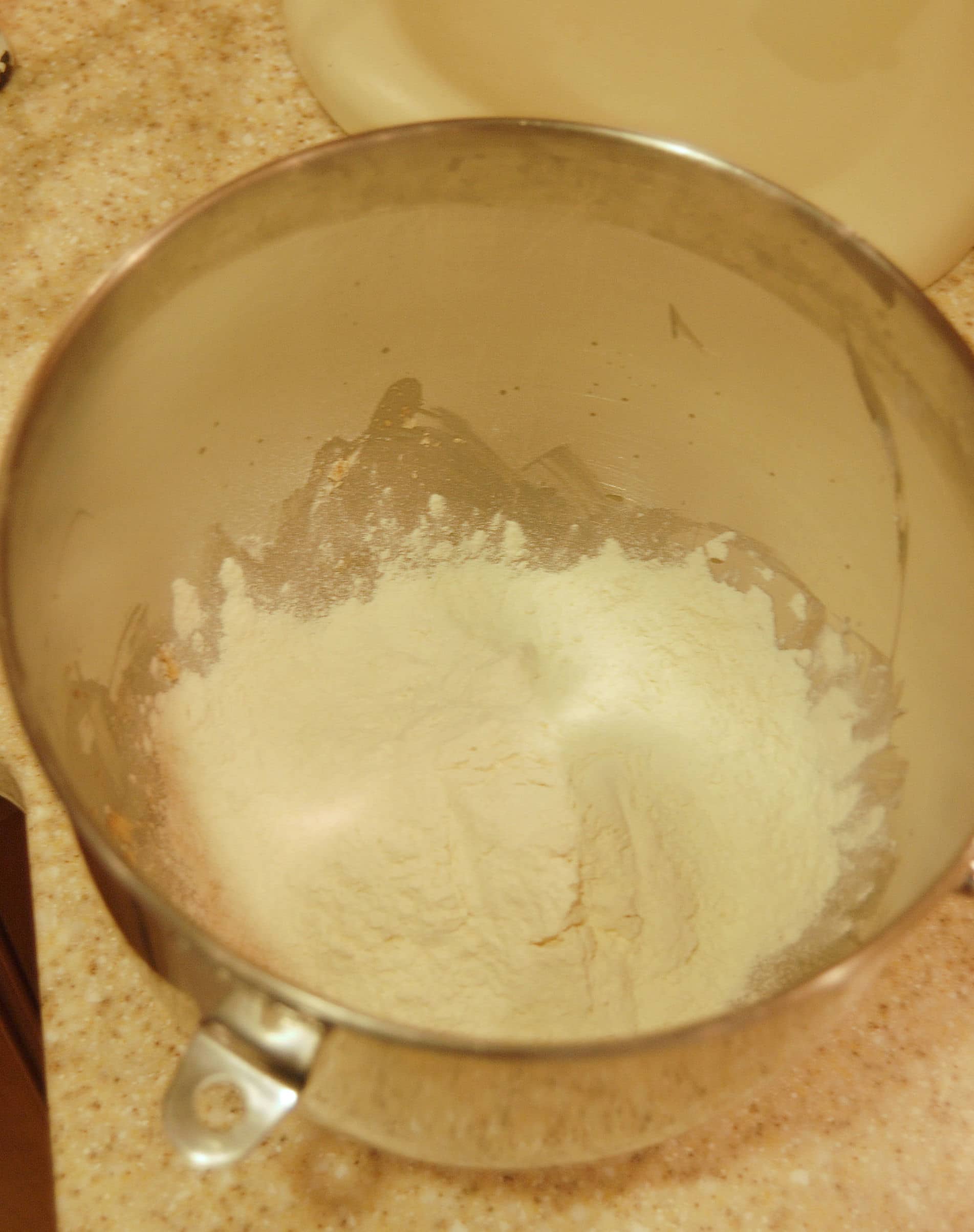 Cover the starter with flour and set aside 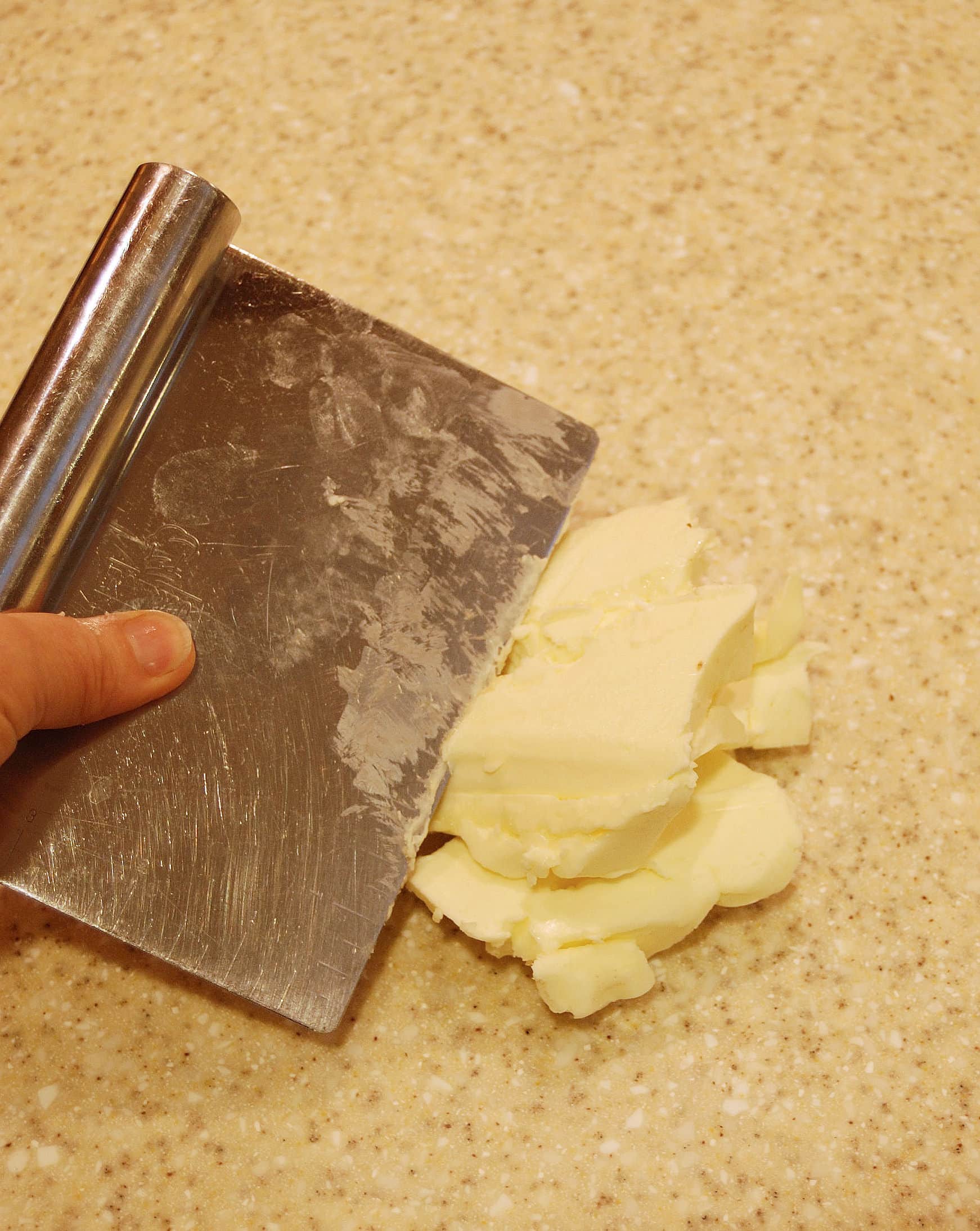 Dot the butter over the dough to create flaky layers 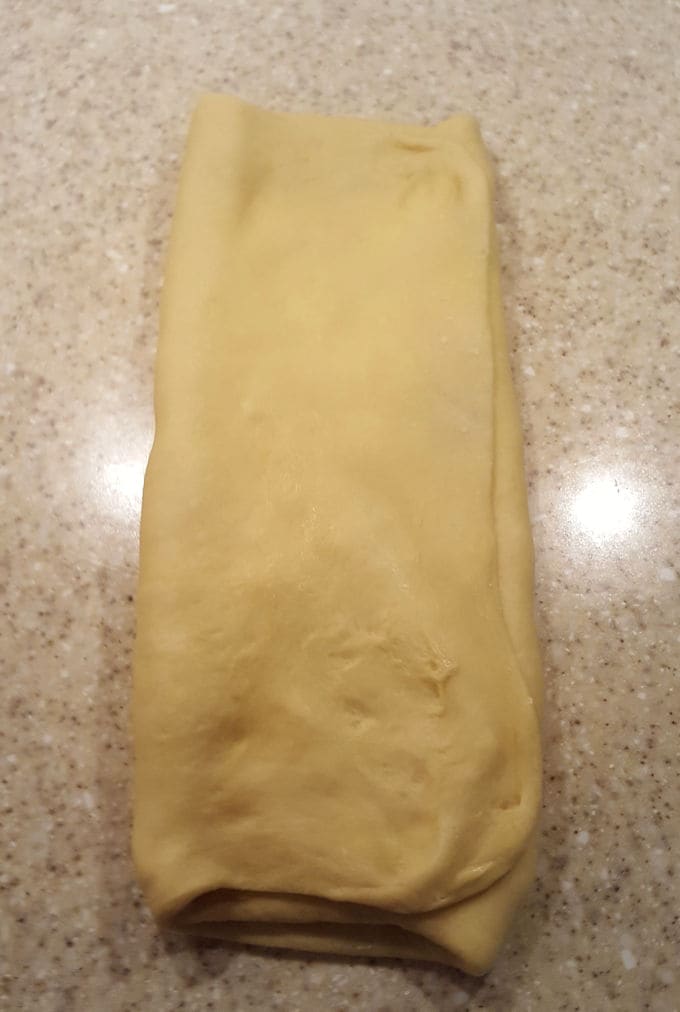 Fold the dough over the butter in 3rds 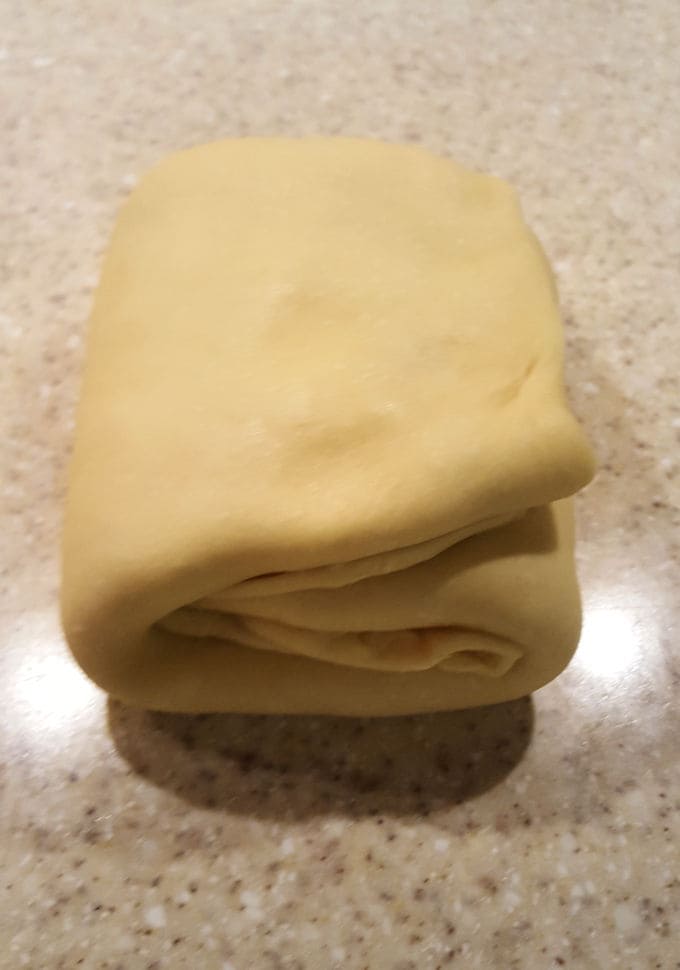 Fold the dough into 3rds again to create more layers 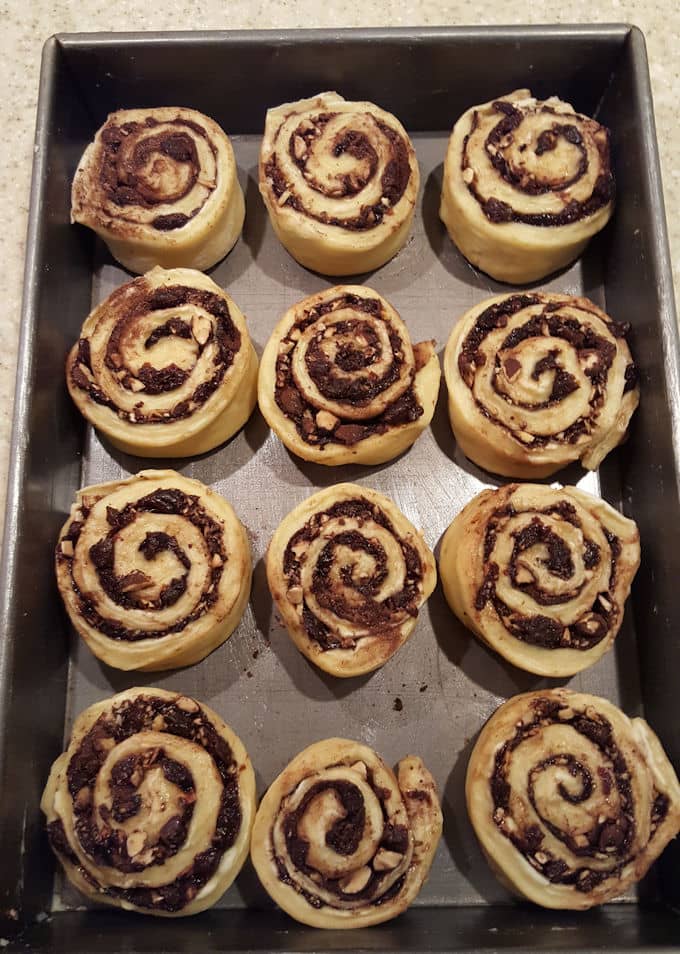 Cut the buns and arrange in a buttered pan. The buns will rise to fill the pan 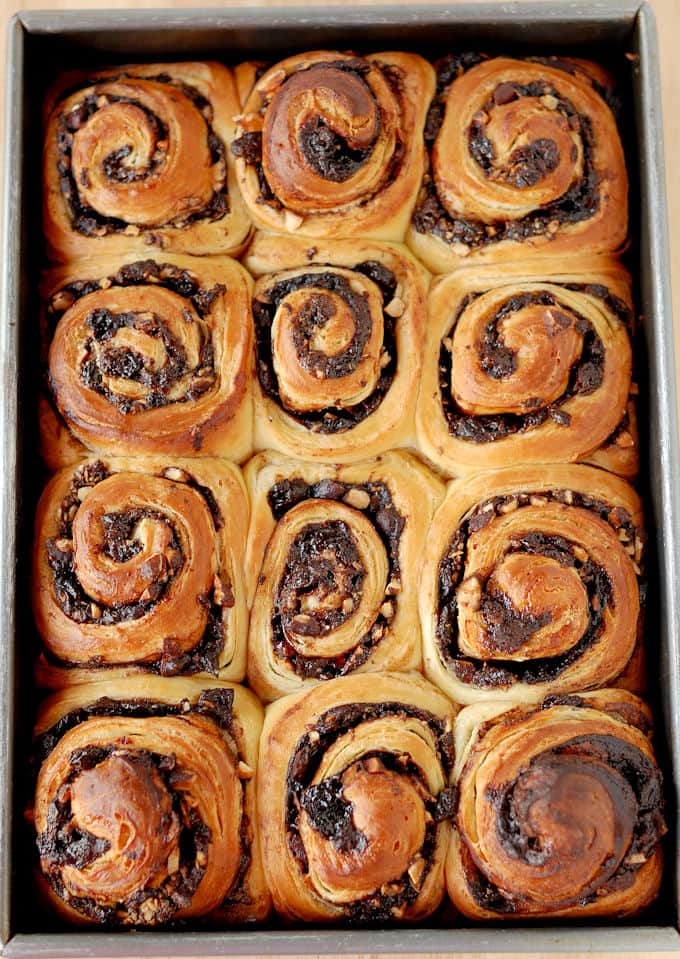 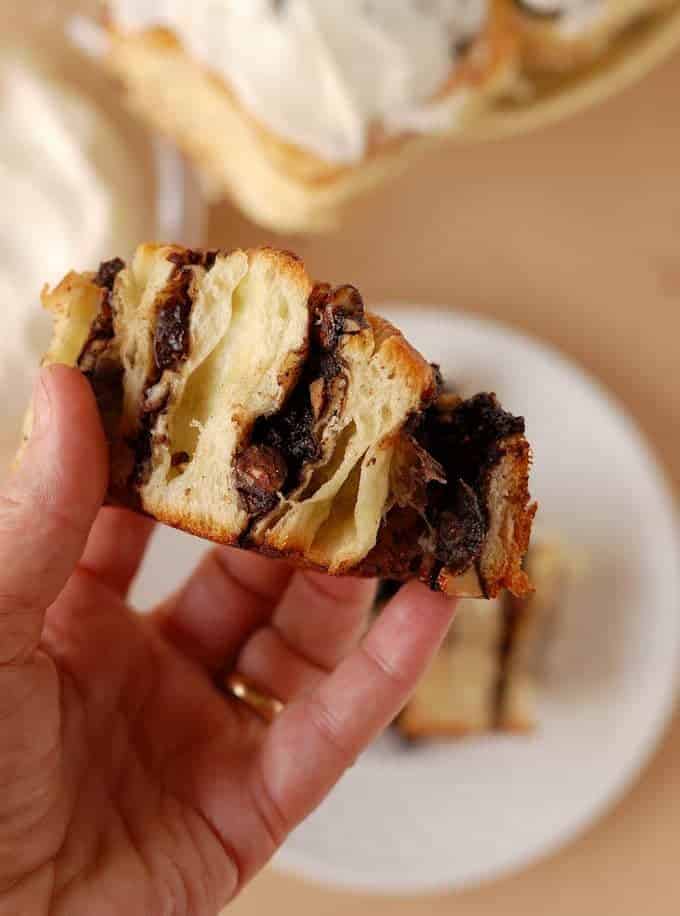 Pour 1 cup of boiling water over the dried cherries. Allow them to plump for about 20 minutes, then drain and chop to 1/4" pieces.

At this point the wrapped logs can be frozen for several weeks. Defrost at room temperature, then cut the buns and proceed with the recipe.

Sounds lovely! I love the idea of adding the folds, and especially making them individuals. but can you please verify which measurement is correct for the milk at the start? 1/3c or 2/3c? (5oz/160ml is more like 2/3c). Thanks!

Hi Laura, thanks for the heads up. That was a typo and it should be 2/3 cup milk. The entire recipe and post needed updating so I did that too. The slider with the process photos was broken so you can now see the process photos too.

Eileen, these are gorgeous! I think I could eat a whole pan of these in one go! Chocolate and cherry is one of the best flavour combinations!

I'll take a few dozen of these to get me through the holidays!

wonderful buns with frosting.......... Love the combination of chocolate cherry and almond.