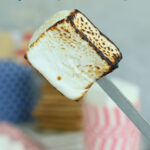 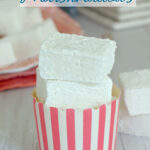 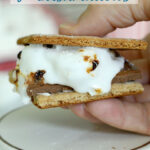 Homemade Vanilla Marshmallows are in another league from the store-bought kind. They’re not even from the same planet, as far as I’m concerned. Even if you think you don’t like marshmallows give these try. They just might change your mind.

The truth is, I hate marshmallows. About once a summer I’ll make a s’more with a super-toasty marshmallow and I’m good for the rest of the year, and that’s mostly about the chocolate and the graham cracker.

I don’t like those chocolate marshmallow cookies or the mini marshmallows in hot cocoa mix. Don’t even get me started on Easter “peeps”, ewww!

Buuutt, the first time I tasted homemade marshmallows I was immediately smitten. Instead of having the texture of a rubber ball, these marshmallows are soft and luscious.

Scroll through the process photos to see how to make Vanilla Bean Marshmallows:

If you grow your own mint, you can make Mint Marshmallows.

Toast a Vanilla Bean Marshmallow and pair it with Homemade Graham Crackers for the best s’more of your life. 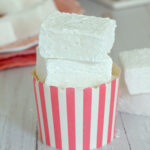 The recipe can be halved and made in an 8″x8″ square pan.