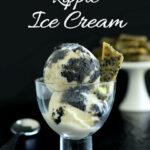 Black Sesame Ice Cream will be right up your alley if you love peanut butter ice cream. I layered creamy vanilla ice cream with a ripple of black sesame paste for an entirely new ice cream flavor.

A rediscovered jar of black sesame paste not only led to this Black Sesame Ripple Ice Cream recipe, but also a new recipe for Black Sesame Seed Brittle.

Anyway, all the recipes I saw seemed fairly straight forward; take a basic ice cream recipe, add black sesame paste and freeze. So that’s what I did. I assumed I’d make the ice cream, take a few photos, and I’d be done. Well, you know why they say to “never assume”…

The first time I made this recipe I just replaced some of the cream in the recipe with black sesame paste. Right away I could see that it wasn’t going to be the most appetizing color.

After I ran the ice cream in the machine I still thought the color wasn’t great. But I could live with a less than beautiful color if the texture and flavor of the ice cream were really good. The following is a photo I took of the first batch of ice cream.

Not only was the color kind of iffy, I wasn’t happy with the texture of the ice cream or, really, the flavor.

I found that the sesame paste gave the ice cream a slightly pasty texture. Although I liked the nutty flavor of the black sesame in the ice cream, it was a little one-dimensional.

Scroll through the step by step photos to see how to make Black Sesame Ripple Ice Cream:

Now that you’ve made this recipe what should you do with all the extra egg whites? Check out this collection of recipes that use extra whites for some great ideas.

If you love this recipe as much as I do, please leave a 5-star review.